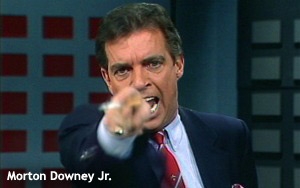 Stop me if you’ve heard this one.

Many people who know me personally have heard this story -- about how Morton Downey Jr., the talk-show firebrand of the 1980s, called me on the phone when he was dying of cancer in January 2001 to ask me to help him publicize his death.

This request, which I swear is true (I have this conversation on tape to prove it), had to do with his desire to manage his public image in such a way that people would not think badly of him after he died. As he faced the end (his death would come about 10 weeks later in March), he was evidently trying to make amends for the way he acted more than a dozen years previously, when he became the most notorious TV personality in America.

The story of his meteoric rise and fall is told in an absorbing documentary coming to TV for the first time Thursday night (Aug. 20) on CNN. The documentary -- titled “Evocateur: The Morton Downey Jr. Movie” -- sweeps the dust and cobwebs off the Downey era -- a period that, in actual fact, was a mere sliver of time lasting a little less than two years. Completed in 2012, “Evocateur” was produced and directed by Seth Kramer, Danny Miller and Jeremy Newberger of Ironbound Films.

Understandably, the documentary focuses mainly on the two years -- fall 1987 to summer 1989 -- in which Downey hosted the wildest TV talk show anyone had ever seen up to that time. The film also provides much-needed context about the life of Downey (who was 54 when he became nationally famous) both before and after his brief talk-show heyday.

As the film points out, a handful of similar talk shows flourished briefly in the divisive 1960s, featuring hosts who railed angrily and loudly against the disorder that they perceived was undermining the traditional American way of life.

Downey, however, seemed angrier and louder than these predecessors as he faced off against guests who were invited onto “The Morton Downey Jr. Show” because they held views that were diametrically opposed to Downey’s. A “talk” show in name only, the “Downey” show quickly devolved into shouting matches in which Downey, a chain smoker, would blow smoke in his guests’ faces and assault them verbally (and sometimes physically).

The show originated first as a local show on New York’s Ch. 9 (WWOR), an independent station that was then producing its own prime-time shows. Within weeks of its launch, “The Morton Downey Jr. Show” became so infamous that it went into national syndication the following year.

But it lasted only until summer 1989 as advertisers avoided it, Downey’s behavior became more erratic, and the effort required to produce a confrontational TV show every day proved unsustainable. That was especially true where the booking of guests was concerned; eventually, no one wanted to be on the show.

All of this is told in detail in this documentary, with plenty of videotape from the period and interviews with many who were there.

Near the end of the film, attorney Alan Dershowitz tells a story of how Downey called him on the phone near the end of his life. Dershowitz’s impression was that Downey was trying to tidy up his personal affairs before he died. Dershowitz’s recollection was similar to my own.

In my own conversation with him in January 2001, Mort put it this way: He said he was looking for someone -- perhaps a journalist such as myself with whom he was acquainted -- “who can say he knew the guy [meaning Mort] and the guy was not a pig."

I told him not to worry; I did not think he was a pig and I didn’t think anyone else did either. I had known him since 1987, when his talk show first started, and he called me occasionally in the years that followed to tell me about present and future projects such as new talk shows and network sitcoms that he insisted were in the works, although most, if not all of them were fanciful.

I had always enjoyed his phone calls and I assured him in this phone call (which was the last I would ever receive from him) that I had “nothing but good feelings” about him and “they would be reflected in anything I write.”

When he died on March 12, 2001, I wrote him a nice tribute. “What he really wanted was to be remembered,” I wrote, recalling our final phone conversation.

This documentary, “Evocateur,” makes this possible.