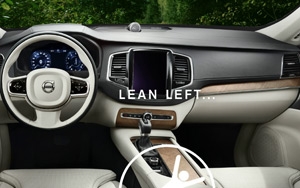 Volvo is promoting its “idea of luxury” and its XC90 midsize SUV with national cinema ad company Screenvision, a New York-based cinema advertising network on 14,200 screens in 2,200 theaters. The partnership centers on a 90-second interactive advertisement that will run in 100 Screenvision contracted cinemas for a month and a half.

The interactive ad, using technology, Interactive Dimension, developed by New York-based Audience Entertainment, puts the audience in the driver’s seat, and lets them direct the content by raising their arms and waving them left or right. The movements, or the majority thereof, as discerned by the technology, determine the music, whether it’s a day or night drive, and the car’s speed.

The ad, via Grey Group and Mindshare, builds off Volvo’s “Our Idea of Luxury” campaign with a focus on the features of the new vehicle, specifically those the audience gets to choose.

Adam Cassels, CMO at Audience Entertainment, said in a statement that the idea is to give audience members a sense of what it's like to sit in the car. “This is a fun and unique advertising experience that can’t be replicated in other media environments.”

Said John Militello, director of marketing at Irvine, Calif.-based Volvo Cars North America: “This provides a richer experience than a simple video or picture advertisement, and is a more immersive way for people to experience Volvo.”

The launch for the 2016 XC90, on sale this fall, was itself something of a cinematic event, with a big amphitheater event in Sweden, complete with Oculus Rift 3D glasses, the whole thing as much like a rock concert as a car reveal.