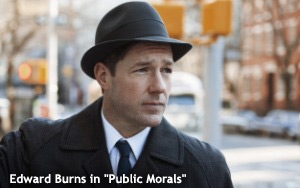 This time, it’s being brought to you by a new cop show called “Public Morals” coming to TNT next week (Tuesday, Aug. 25). The title refers to a squad of plainclothes New York City cops who are the centerpieces of this new drama series from Edward Burns. He’s the executive producer of the series, and he also wrote and directed at least some of the episodes. He is also the star of the show.

These plainclothes officers work in the NYPD’s Public Morals squad (or maybe it’s “department” or “division” -- I have no idea). This is a unit that became known in later years as the Vice Squad -- the group responsible for policing prostitution, gambling and whatever else vice cops concern themselves with.

The show is set in the 1960s, but if you are expecting the cop-show version of “Mad Men,” then be prepared to have your hopes dashed. Whether or not you liked “Mad Men,” that show at least managed to remain laser-focused on its era in a way that’s rare for made-for-TV period dramas. “Mad Men” really made you believe its characters were living in the 1960s. However, that’s not so for the majority of recent TV shows set in the mod decade.

And that’s especially true for “Public Morals.” I watched the first two episodes (provided by TNT) and didn’t believe for a second that any of these people were living in the 1960s. Nor did I believe any of them were cops or crooks either.

When you watch “Public Morals,” you get the feeling that the producers assumed that if they parked a bunch of 1960s cars on a New York City street and dressed their cast in old raincoats and fedoras, audiences would instantly be transported to another time. But for some reason, this doesn’t work with “Public Morals.” When you come right down to it, the characters on this show simply look like modern-day actors playing dress-up. Maybe it’s a matter of details: When some of them smoke, for example, you get the feeling they’ve never done it before.

The title of the show, “Public Morals,” is meant to signify more than just the name of a police squad. It’s also a general reference to “morals” -- or more specifically, the lack of them -- in the public realm. In the show, the cops of the Public Morals Squad are all on the take, as they maintain an uneasy partnership with local organized crime figures.

The cops and crooks are so closely related that they’re literally related; one of them is the uncle of Edward Burns’ cop character.

This particular hood is played badly by Timothy Hutton. Other hoods -- all of whom are Irish on this show -- are played by Brian Dennehy and Neal McDonough. They are said to control the neighborhood west of Times Square in Manhattan that was once widely known as Hell’s Kitchen.

One of the ways in which this show’s writers try to make you believe their characters are tough macho men is to sprinkle their dialogue liberally with profanity and given the era, the occasional politically incorrect ethnic slur such as “colored” or “wop.” It’s not that the dialogue on “Public Morals” is repellent (which it is), but that everything that comes out of these characters’ mouths are clichés --and poorly written ones at that.

One detail in “Public Morals” that I assume was unintentionally hilarious was somebody’s decision to name the Ed Burns cop character Muldoon, as if no other “Irish” name were available. When you learn this, in the context of this cop show that is supposed to take place in the 1960s, you can’t help but think of another Muldoon from a 1960s cop show -- Officer Francis Muldoon, played by Fred Gwynne on “Car 54, Where Are You?”

Let the record show that none of the other cops on “Public Morals” are named Toody.

tv
2 comments about "Costumes And Cars Are Not Enough To Make You Believe It's The '60s".
Check to receive email when comments are posted.
Read more comments >
Next story loading