From The Future, Neil deGrasse Tyson Talks 'The Martian'

With input from NASA and its Jet Propulsion Laboratory, the upcoming film 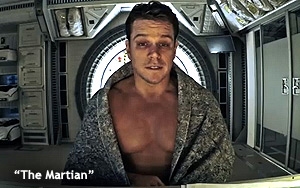 is looking to inject some realism into the science fiction genre. Now it’s getting a boost from the country’s pre-eminent astrophysicist.

Director of the Hayden Planetarium and television host Neill deGrasse Tyson appears in a short film promoting the film. Making his acting debut playing a grayer version himself in the year 2035, deGrasse Tyson hosts a version of his National Geographic “StarTalk” program, speaking about the film’s central Mars mission as “Our Greatest Adventure.”

In the video (created by theatrical marketing agency 3AM), the astrophysicist speaks of the first mission to reach the red planet “back in 2029.” He then goes on to explain the next trip is “one of humanity’s most ambitious undertakings.” DeGrasse Tyson details the dangers and challenges of the journey, outlining the 140 million miles of the journey and dangers of solar flares, radiation and asteroids. (The film itself tells the story of an astronaut — played by Matt Damon — stranded on Mars after a storm forces the rest of his crew to leave the planet’s surface.)

“Because the authenticity of this film has been very important [to director Ridley Scott], when we reached out to [deGrasse Tyson], he really responded to it,” Alison Temple, managing partner at 3AM, tells Marketing Daily. “It was a straightforward approach to what we were trying to accomplish.”

The film is part of a five-segment series meant to show off the fictional mission, says Chris Eyerman, creative director at 3AM. Three of the segments have already been released, with two more to come before he film’s early October opening. In addition to the deGrasse Tyson short, segments depict cast members in character delivering introductions to people on Earth and interviews with the characters after they had purportedly each spent 10 days in isolation.

“We’ve been trying to create non-traditional content to tell the story of [the run-up to] what will be part of the film,” Eyerman tells Marketing Daily. “We wanted to showcase the awesomeness of a mission to Mars, and who better to do it than Neil deGrasse Tyson?”

The short films have been promoted through the film and agency’s social media channels as well as through those of production company 20th Century Fox. The StarTalk segment will also air on Nat Geo in a few weeks.