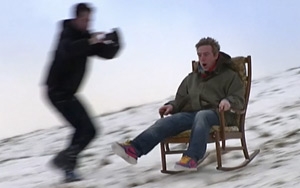 Consumer brands have given the winter holiday season, however one celebrates it, an official pre-season that starts around September these days. Earlier for some brands.

For most brands, this rollback of December marketing to around late summer might be seen as an offense to good taste and propriety. But for airlines, it is a legitimate tactic. It is already getting late in the day to book December travel. Delay and pay.

British Airways, for its part, is celebrating Christmas early with a new campaign aimed directly at ex-pats. The #NoPlaceLikeHome digital campaign is for Brits living and working across North America.

The creative focuses on traditional British Christmas, and has a humorous, nostalgic take on how Britain does the season. The carrier says the idea is to provoke nostalgia, memories and ultimately position British Airways as the airline to fly home with.

The effort -- touting deals to London, Manchester, Glasgow and Edinburgh -- includes targeted email, social and digital activity both in the U.S. and U.K. It also features a video all about Christmas in “good old Blighty.” “A traditional British Christmas starts some time in September,” jokes the narrator, who notes that soon it's all over, apart from returning gifts on Boxing Day. “Yes,” says the voiceover, “It's a chance to be with your nearest and dearest..and your family.”

There is also a customizable "postcard generator" for people in the U.K. to send to loved ones on the other side of the pond, exhorting them to come home for Christmas. British Airways says starting on Sept. 29 (already a bit late to book) Brits can send a generic postcard or choose a template from 106 U.K. counties and add a personal message.