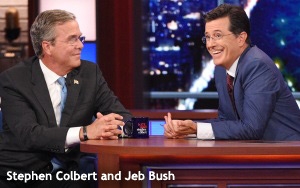 Looking back on Stephen Colbert’s debut Tuesday night on “The Late Show” on CBS, you begin to understand why the show had to run for an extra nine minutes.

So many details to mention: Jon Stewart’s cameo appearance as an umpire in the show’s opening, Colbert “thanking” former Letterman “Late Show” stage manager Biff Henderson for his years of service and then paying tribute to Dave, the introduction of various pieces of bric-a-brac decorating the new “Late Show” set (including a “cursed amulet” and a Captain America shield), an elaborate “live” commercial for Sabra hummus, a cameo appearance by NBC rival Jimmy Fallon, the Donald Trump-Oreo bit, the action-movie spoof with George Clooney, the interview with Jeb Bush, the musical number featuring a crowd of guest performers that closed the show, and more.

The CBS “Late Show” hadn’t gone on this long since, well, the show preceding this one -- Letterman’s farewell last May, which stretched to just shy of an hour and 20 minutes.

Colbert and his team certainly seemed intent on making a splash on their first night, and there’s no debating that the show demanded your attention. Loud noises, bright lights and frantic activity will do that.

While watching the show, you had reason to wonder how on earth Colbert will maintain this level of energy every night without becoming sick with exhaustion in a few weeks. At the same time, however, you knew that an opening-night show such as this one was probably exceptional. In the days and weeks to come, you should expect the new Colbert “Late Show” to settle into its new surroundings and morph into a nightly show constructed more or less along the lines of its competitors -- the two Jimmies on NBC and ABC.

But on opening night, sheer tonnage was the name of the game. The show opened with Colbert singing “The Star-Spangled Banner” in locations ranging from New York’s Central Park to the stockyards of Fort Worth, Texas.

The show soon made its way back to the newly renovated Ed Sullivan Theater where CBS President Les Moonves was seen in the audience seated behind a fanciful “machine” that allowed him to switch instantly to a “Mentalist” rerun whenever he was displeased with anything Colbert was saying or doing. “The Mentalist” was one of the CBS cop shows whose reruns occupied the “Late Show” time slot while Colbert prepared all summer for this week’s debut.

The Fallon cameo came when Colbert took up a remote control and aimed it at a video screen behind his “Late Show” desk and came upon Fallon on “The Tonight Show.” Fallon turned to the camera and said hello, and then promised to meet Colbert “in the locker room” after their shows.

Soon, it was on to the “cursed amulet,” which was apparently compelling Colbert, against his will, to do a lengthy on-air commercial for Sabra roasted red pepper hummus and Sabra grab-and-go snack packs.

The other product to get generous exposure on the premiere of the Colbert “Late Show” was Oreo cookies, which Colbert could not stop eating as he showed a series of video clips of Donald Trump making outrageous statements. Among them was Trump’s complaint recently about Nabisco’s decision to close the Chicago plant where Oreos were baked and move the operation to Mexico. Trump then announced he will no longer eat Oreos.

Speaking of commercial largesse, a commercial break lasting an astonishing nine minutes came at the 40-minute mark in the show. Letterman’s “Late Show” was notable for long commercial breaks in the show’s second half-hour, but this nine minutes of commercials seemed long even by Letterman standards. Among the advertisers who had spots in this long break were three companies who most people would see as adversaries of CBS (and broadcast television in general): FX (for the October season premiere of “Fargo”), YouTube and Netflix.

The show’s final segment was evidently created to shine an introductory spotlight on Colbert’s band, led by New Orleans jazz musician Jon Batiste, 28, fronting a band called Stay Human. They were joined by musical guest-stars such as guitar legends Buddy Guy and Derek Trucks, and gospel singer Mavis Staples for a performance of the old Sly and the Family Stone song “Everyday People.” Colbert joined in the singing too, demonstrating for at least the second time in his CBS debut that he can sing.

It was a boisterous performance -- so much so that you could be forgiven for questioning the appropriateness of such a clamorous musical number closing a TV show at such a late hour -- 15 minutes before 1 o’clock in the morning (Eastern time).

However, Colbert’s debut marks the official start of a new era in late-night TV -- louder, faster, and more competitive than ever, even in the wee hours of the morning.