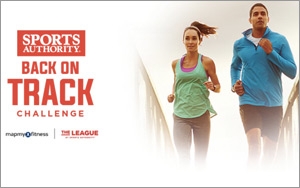 For the first time, Under Armour is doing a program linking workout activity to sports retail rewards. Sports Authority has laced up a partnership with the athletic gear company centered on UA’s MapMyFitness app, which is on the App Store and Google Play.

The program lets “The League by Sports Authority” members get rewarded for completing activities within the fitness platform. It starts with an interactive challenge for UA Connected Fitness users, which the company now pegs at about 150 million people. They can also earn loyalty points and rewards for The League.

The Sports Authority says the partnership expands a member’s ability to earn points by connecting, linking mobile devices, and recording workout activities via the MapMyFitness suite. Once connected, all workouts logged on the platform will be stored in the loyalty system for reward redemption. The first challenge, “Back on Track,” launched on Wednesday, lets members who log three workouts or 10 miles a week, have a chance to win a $500 Sports Authority gift card.

Under Armour this year added new platforms to its Connected Fitness app stable with the acquisition of Endomondo and MyFitnessPal. Endomondo is an open fitness tracking platform and social fitness network.

And this spring the Connected Fitness unit launched updates that enabled its line of apps — UA Record, MapMyRun, Endomondo and MyFitnessPal — to run on Apple Watch, via the Apple Watch App Store.

In terms of hardware, Under Armour partnered with Taiwan-based tech company HTC this year toward Grip, a co-branded connected fitness-tracking bracelet. It was supposed to have launched already, but HTC delayed the launch pending a reworking after testing with consumers.

UA had a huge 2014, with sales up 32% to over $3 billion for the first time. That was driven by core apparel, which saw a  30% increase. Footwear was up 44%, and accessories 27%. The company spent in the neighborhood of $560 million to acquire Endomondo and MyFitnessPal.