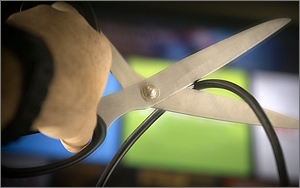 Cord-cutting, cord-cheating and “cord-slimming” have not yet become widespread practices among consumers, but they are a very real future threat for cable, satellite and other pay-TV companies.

According to Digitalsmiths, which is owned by TiVo, nearly half (46%) of U.S. consumers are considering cutting their pay-TV cords entirely or are in danger of switching to another provider within six months. Of those consumers, however, 41% would stay if their providers added new functionality that would make it easier to find something to watch.

According to the survey (which queried more than 3,200 consumers during the second quarter of 2015), nearly 80% of consumers are also interested in pay-TV packages in which they could select and pay for only the channels they wanted. (The ideal number of channels? 17 or 18 per package, for a price of about $39.50 a month.) More than half of consumers (57%), meanwhile, are aware of so-called “OTT skinny packages” which provide network and other programming via the Internet for a smaller fee.

“The [Pay-Tv] providers are dabbling in those as well,” Purser says. “I think you’ll be seeing some of these ‘skinny programs’ from them as well.”