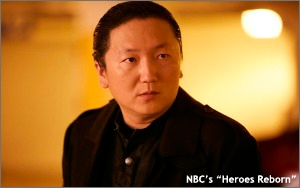 Where have all the “Heroes” gone? Gone elsewhere, some of them.

That’s the key question (and an answer) for fans of the original “Heroes” series on NBC which is getting revived tonight with a sequel series called “Heroes Reborn” five years after it was last seen.

The original “Heroes” aired from 2006 to 2010. It introduced the world to a gaggle of “ordinary” people with extraordinary powers. Some could fly, others could read people’s minds, another could time-travel, and one -- a fresh-faced high school cheerleader named Claire Bennet -- could suffer grievous injuries, then heal from them almost instantaneously.

The role made Hayden Panettiere a star so she went off to have a career, most notably on ABC’s “Nashville,” which started its fourth season Wednesday night.

She’s nowhere to be seen in the two-hour premiere of the rebirth of “Heroes” Thursday night on NBC, and neither are a number of other stalwarts from the original “Heroes” who were evidently too busy or too apathetic to come back just so they could get an opportunity go over the same old ground.

As a result, “Heroes Reborn” introduces us to a new group of super-powered humans, while reacquainting us with the handful of original heroes who agreed to return. Although some time has passed between the new and the old shows, the central storyline seems to be the same -- some kind of huge “event” is looming and only the “heroes” can save the planet.

The main difference in this new sequel series -- in addition to all the new characters -- is that ordinary humans are now well-aware of this population of superhero humans in their midst and they treat them like an unwanted minority group. In the popular culture, this group is referred to as “evos” (referring to “evolutionary” humans) and they are generally looked upon with suspicion.

That is especially true (if not an understatement) after a huge bomb is set off at a conference in Odessa, Texas, that kills hundreds of evos and ordinary humans who had gathered there for some sort of peace summit. The attack, which occurs in the opening moments of Thursday night’s episode, is blamed on the evos. The date -- June 13 -- is then referred to forevermore in the manner of 9/11 as a date which lives in infamy.

Vigilantes then go in search of any evos they can find and kill, driving the evos underground. But wait, there’s more – the evos are the only ones who can save the planet from this unknown cataclysmic event. And that’s a problem because every time they try to get together for meetings, someone finds out about it and attacks them.

If this all sounds complicated, fear not because it really isn’t. It is tedious, however, as this two-hour premiere plays like one long set-up episode that takes its sweet time to make a point, but then doesn’t quite get there.

Among the reasons for this is a long sequence involving a young Japanese woman who travels between the real world and an animated one in which she is a lithe samurai warrior who engages in swordplay with a series of attackers three times her size who she eliminates one after the other.

Of course, we’ve seen this in movie after movie ( the “Kill Bill” series, for example), comic books, graphic novels and video games (which these sequences are designed to mimic). These portions are the dullest of the entire two hours and for a viewer, they have the effect of stopping the show in its tracks, not that there is much to hold one’s interest in the first place.

It’s reasonable to assume that NBC felt there was still enough of a groundswell of interest in the old “Heroes” series that a revival would stand at least a 50-50 chance of reestablishing the franchise. The problem with this thinking is that the first “Heroes” is best remembered from its first sensational season when nothing else on television looked quite like it and it was critically acclaimed (by yours truly, among others).

Eventually, it grew tiresome and “full of itself,” as one critic put it. The acclaim subsided and the ratings declined, leading to its cancellation.

So why bring it back? Possibly because the popular culture’s embrace of superhero stories had NBC thinking that a revival of “Heroes” might be a timely project to take up. As a result, superhero fans, your “Heroes” are back – at least some of them. For the rest of us, though, there are other things to watch on Thursday night.