'Scream Queens' Was DOA, Then Suddenly Alive, Thanks to 'Plus 3' Ratings 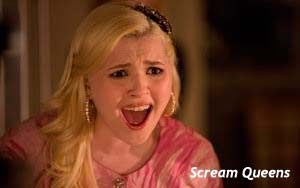 Suddenly, the trade press is awash in stories about the “Live+3” ratings.

These are the numbers that measure a TV show’s additional viewership via other platforms and methods in the three days following their first airing -- including viewing on network Web sites, Hulu and the like, plus on-demand, DVR-recording and, in some cases, replays two days later on the same network.

The show biz trade press -- represented chiefly these days by Deadline.com, The Hollywood Reporter (THR.com) and Variety  (Variety.com) -- seem to have decided that the Live+3 ratings should now be reported with the same enthusiasm (i.e., space) they formerly reserved for the just-plain ratings (aka “same-day” ratings). The stories began appearing in the last few days, reflecting the first official week of the new fall television season last week.

One of the deciding factors seems to have been the Live+3 performance of “Scream Queens,” the Fox horror-movie satire series that must have had Fox execs screaming in horror when they first got a look at the frighteningly low overnight ratings this show scored in its two-hour premiere last Tuesday night.

The numbers were a horror story for this series, which Fox was touting more than any other new fall show. Despite the pre-publicity, “Scream Queens” drew a total audience of just 4.04 million, the worst of any show on the Big Four networks that evening.

When the ratings came out on Wednesday, some critics -- who had panned the show to begin with -- declared “Scream Queens” to be dead on arrival. However, when the Live+3 numbers started to come out over the weekend for Tuesday night's shows, “Scream Queens” seemed to have risen from the dead, at least as far as the trade press was concerned.

Their stories crowed that “Scream Queens” increased its demo rating by a little over 1 point to bring its 18-49 tally to a 2.7 and change.

Fox execs then morphed from their impersonations of that famous Edvard Munch painting called “The Scream” to waxing enthusiastic about their show which they believed had gone from a miss to a hit in the space of three days. “ ‘Scream Queens’ is a model for contemporary viewership,” said a statement from Fox programming chiefs Dana Walden and Gary Newman (apparently, when they speak, they do so in unison).

All of the networks put out various releases last week ballyhooing the Live+3 numbers for Week 1 of the new season. Among the shows they highlighted for drawing additional viewership were “The Muppets” (ABC), “Limitless” (CBS), “Blindspot” (NBC) and a bunch of others.

Padding the numbers or otherwise putting the best possible face on the ratings is nothing new. Networks and their publicists have been doing this for decades. And you can hardly blame them for trying to draw attention to all of this additional viewership. Basically, by adding in these other numbers, you get totals that, in theory, don’t make the time slot-ratings results seem so bad.

And a viewer is a viewer, whenever or wherever they watch a TV show. So why not count them? Of course, where the advertising community is concerned, the significance of the Live+3 viewing experience is probably a subject for disagreement and debate since at least some of these other modes of viewing -- most notably DVR recording, for example -- give viewers an opportunity to fast-forward through the commercials.

However, judging from all the attention being paid to them over the last few days, these additional-day ratings -- whether they be “plus 3” or “plus 7” – are evidently here to stay.

tv
1 comment about "'Scream Queens' Was DOA, Then Suddenly Alive, Thanks to 'Plus 3' Ratings".
Check to receive email when comments are posted.
Next story loading