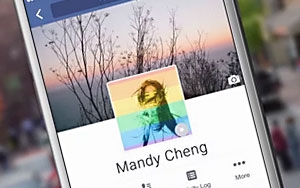 Trying to keep mobile users engaged, Facebook this week is rolling out some new mobile-friendly features for profile pages, including video integration.

Soon, users and brands will be able to film short, looping video clips that will play for anyone who visits their profile.

“Profile videos will let show a part of yourself you couldn’t before, and add a new dimension to your profile,” Aigerim Shorman and Tony Hsieh, product managers at Facebook, explain in a co-authored blog post.

Facebook has also made some design changes to mobile profile, including putting users’ profile picture and video front and center, making their pictures bigger than before. It is also going to allow users to show the world a temporary profile picture for a specified period of time, before reverting to their standard pictures.

This should come in handy when users want to make a time-sensitive statement with their profile pictures, whether it’s a Chicago Blackhawk fan celebrating the team’s Stanley Cup win or a supporter of LGBT rights showing solidarity with a rainbow flag.

Shorman said it was inspired to create this feature after more than 26 million people used Facebook’s Celebrate Pride filter to show their support for marriage equality.

“It can be a visual status update to let your friends know what’s going on in your life today, or it can be your statement of solidarity for a cause you feel strongly about,” according to Shorman.

Facebook is also trying to make it easier for users to see what others can view by adding a new customizable space at the top of their profile. With it, users can curate their space by changing the visibility of the fields.

Users are also being encouraged to fill out a new, one-line "Bio" field by selecting certain public About fields like work and education details.