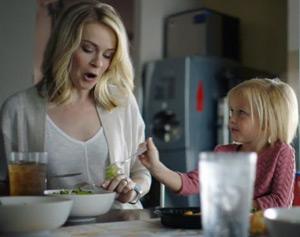 Fast-casual restaurant chain Noodles & Company has launched a campaign, "Made. Different," to drive awareness of a new food platform and brand positioning.

The big changes coincide with the brand's 20th anniversary, and the campaign's kick-off date, Oct. 6, is also "National Noodle Day."

The brand has announced that all items on its core, "globally inspired" menu — noodles, sauces, soups, condiments, dressings and bread (including a new petite baguette) — are now free of artificial colors, flavors, preservatives and sweeteners.  (Beverages, cookies and rice crispies are currently exceptions to that rule, although the company says it's exploring  "free-from" beverage and dessert options.)

In addition, over the next two years, Noodles & Company will offer an expanding selection of meats, poultry and dairy ingredients from animals that have never been fed antibiotics or hormones.

The chain's schedule for these changes — what it calls its "food journey" — is posted on a new "Get Real" microsite created as part of the campaign. The site also offers the brand's philosophy, a list of its ingredients, a list of the ingredients it bans, and information about how it prepares food. The timeline makes it clear that Noodles & Company has long been a pioneer on the "clean" ingredients front, offering organic tofu since its inception in 1995, and introducing naturally raised pork nationwide in 2012 and antibiotic-free chicken in all of its Colorado restaurants as of last year.

The "Made. Different" campaign, from the Barkley agency (Kansas City, Mo.), stresses the chain's "real" food, cooking techniques and flavors.

It also stresses transparency, conveying "both how and why we're 'made different,' what we're still working on, and when people can expect those changes to happen," says Noodles & Company EVP and CMO Mark Mears, who reports that the brand's marketing spending is set to double next year. "With all of the confusing reports about what's good for us and not good for us, we want to demystify food and make it simple for people."

Millennials are looking for restaurants that can "provide a fresh, homemade cooking experience," so that they can spend more time enjoying and bonding with their families, Mears adds. "We're all distracted by electronics and our busy lives, but when people are dining over bowls of noodles, they engage and have fun."

The creative ties closely to those points. For instance, a digital ad with 60- and 30-second versions, "Start Here," shows a variety of dishes being prepared from fresh, clean ingredients, followed by footage of families enjoying meals at the restaurant (shown above). A voiceover message says, in part: "Start a family tradition — a moment to savor...a real conversation. Start early. Life moves fast. Kids grow up even faster. The world is set on pulling us apart. Noodles bring us together." It closes by showing a restaurant employee saying:  "At Noodles & Company, everything is made different."

A 16-second video meant for fans to share via social media shows pad thai being prepared with fresh ingredients, with frames of the "made different" message interspersed.

Out-of-home ads feature shots of noodles and other ingredients being tossed in a hot pan, with messaging such as "Do not try this at home!" and "A fresh flip of noodles."

Initially, some of the campaign elements — including the OOH, radio, and in-cinema advertising using the "Start Here" video — are being focused in four key markets: Denver (the chain's founding city), Colorado Springs, Washington, D.C. and Madison, Wis.  The brand will use results from those markets to guide the campaign's expansion in 2016, says Mears.

National elements launching now include the microsite, digital advertising, social media (using the hashtag #madedifferent), SEO, SEM, public relations, in-restaurant promotions and direct mail that's being deployed in nearly all of the chain's markets (it has more than 470 locations nationwide).

On Oct. 6, the brand's Web site is using a pop-up takeover for a "Lucky Bowl Giveaway" in which those who visit Noodles & Company on National Noodle Day earn a chance to win noodles for a year and other prizes.

The pop-up and other promotions are also encouraging consumers to join the brand's Eclub (1.2 million members currently) to get news about a variety of other 20th anniversary celebration activities. Those will continue for another 20 days after the Noodle Day kick-off.

In addition to the consumer-facing marketing, the company is doing training and internal branding for its 10,000 employees, aka "noodle ambassadors." These efforts, says Mears, include an oath, reminder cards, and a poster to be hung in each restaurant as a visual manifestation of employees' commitment to the brand's mission and standards.