Plucky 'Supergirl' Dons Miniskirt And Tights To Save Television 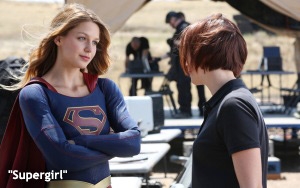 I have the same reaction every time there’s another incarnation of some timeworn story, whether it’s another Sherlock Holmes series, a new version of Frankenstein or Dracula, Superman or, in this case, Supergirl.

A new “Supergirl” arrives Monday on CBS -- coming to Earth from the doomed planet Krypton with great powers that she keeps a secret right up until she reveals herself about 20 minutes into the premiere episode.

The girl -- a young woman named Kara -- brings us up to speed on her origin story as she narrates the show’s opening flashback scenes. Of her cousin Superman, whose arrival on Earth preceded hers by more than two decades, she says blandly, “you may already know his story.”

Of course we know his story; it’s been told a hundred times. And if you’re the type of person who believes the Superman story never gets old, then think again. It is old -- and it’s time the Superman-Supergirl narratives get mothballed.

And yet here we are with a plucky new Supergirl, version 2015. When we first meet her, she’s a nerdy young woman in glasses who lives in a place called National City and works as a go-fer for a self-centered publishing magnate named Cat Grant (played by Calista Flockhart). She’s a TV version of Miranda Priestly, the character Meryl Streep played in “The Devil Wears Prada” -- always barking orders and threatening to fire someone.

We soon meet the company’s newest hire, a hotshot photographer from Metropolis named James Olsen (not “Jimmy”), played by strapping Mehcad Brooks. He’s nothing like the archetypal Jimmy Olsen played so famously by Jack Larson (who died last month) in the “Superman” series of the 1950s. In “Supergirl,” James provides a link to Superman, who this new Olsen considers a friend.

In the “Supergirl” premiere, you will witness Kara’s transformation from insecure office assistant to high-flying superheroine. In telling her story, the show takes up the “live your true self” theme that’s so socially prevalent these days. Kara is a young person in her 20s who conceals her true self, but doesn’t wish to do so any longer. She wants to make her mark on the world, which happens to be a planet -- Earth -- to which she escaped from a home planet riven with strife. In this way, “Supergirl” seeks to be an immigrant story too.

So how’s the show? The premiere episode is uneven. Melissa Benoist is shrewdly cast in the title role. She’s not beautiful, but she’s cute enough to draw the admiration of male co-workers, particularly one to whom she reveals her true identity.

In the premiere (which I previewed this week), the most exciting set piece is a scene in which Kara goes into Supergirl mode in order to rescue a doomed airliner. This sort of everyday derring-do -- in which the superheroine’s super-hearing and x-ray vision help her detect trouble before anyone else does – is what the premiere episode needed most, but unfortunately lacked.

Instead, much of the episode is concerned with a shadowy group of escapees from an intergalactic penitentiary who are endowed with superpowers just like Supergirl and Superman but who intend to use their abilities to conquer the Earth. As is often the case on TV shows of this type, if not in real life, there’s a top-secret government agency assigned to track these interstellar miscreants and prevent them from carrying out their plans.

A one-on-one battle with one of these determined superfoes is surprisingly dull. By contrast, when Supergirl takes on a gang of heavily armed thugs in the midst of a bank robbery, you might be tempted to stand up and cheer.

The intergalactic subplot appears to be a storyline that will continue over multiple episodes of “Supergirl,” if not for the entire season. Hopefully, it won’t take over the show. Our world seems capable of producing more than enough catastrophes -- manmade or otherwise -- to keep Supergirl busy without a needless subplot about would-be conquerors from outer space.

At no time in the “Supergirl” premiere do we encounter Superman, although Supergirl talks about him frequently. Supergirl’s adoptive Earth parents -- Jeremiah and Eliza Danvers -- are on hand to remind us of our cultural “Superman” heritage: They’re played by Dean Cain, star of “Lois and Clark: The New Adventures of Superman” (1993-97) and Helen Slater, star of the 1984 “Supergirl” movie.