Why Should Online Retailers Care About Spanish-Speaking Hispanics?

As the online retail wars continue to rage this year with brick and mortar retailers continuing to bolster their online shopping offerings to compete with the 800 pound gorilla, Amazon, we decided to take an in-depth look of how online shopping habits have changed from this year to last across Hispanic, African-American, Asian, and non-Hispanic white consumers.

If we look at the change in online purchasing habits compared to one year ago, you’ll see Hispanics leading the pack in terms of purchasing more online now than last year: 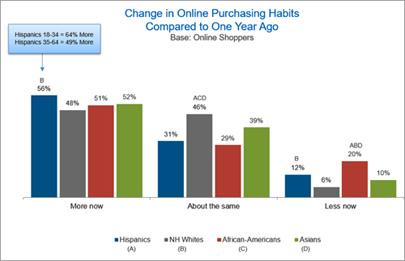 Delving deeper into the Hispanic segment by age, we see that the increase in online shopping this year has been driven by the Spanish-dominant and bilingual: 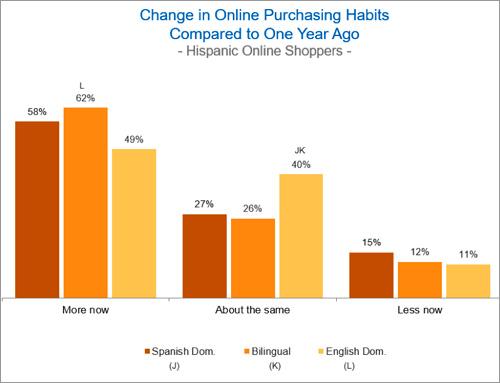 Conversely, we see that English dominant Hispanics have the biggest share (40%) of shopping about the same this year than last year.

So what does it all mean?

There is a clearly an opportunity here for retailers to make their U.S. online shopping experience more Spanish friendly. Our data matches up nicely to Google’s 2011—2014 U.S. Indexed Search Query Data highlighting how the number of Google searches that include common Spanish-language question words nearly doubled over the past three years: 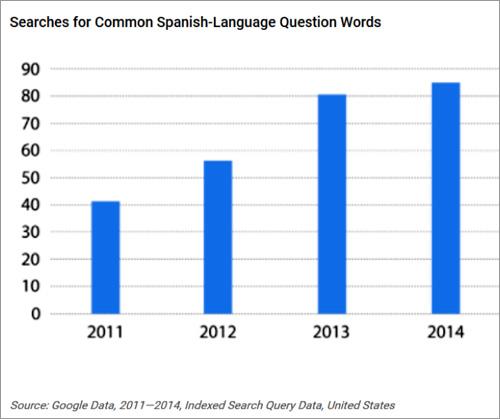 A recently released study indicates that Amazon is the starting point for 44% of consumers searching for products, compared to 34% who use search engines. This initially points to Amazon dominating the online sales landscape, however when we look at growth, Google Shopping Same Store Sales (SSS) saw 46.1% growth, driven by higher conversion rates.

Our data points to a potential competitive advantage Google has over Amazon, Spanish-language search. Google has invested a significant amount of resources to becoming the go-to search engine for all languages in all countries and it looks like it is paying off here in the U.S.

For Amazon to catch up would be a massive undertaking, translating their site into Spanish for U.S. audiences (they have Amazon Mexico and Spain but searching for “bocina”, for example, will give you different results in each site).

This gives retailers who have yet to really commit to the online space a chance to integrate a Spanish component to their online presence as they do not have legacy technology and user interface holding them back. The return on investment will be clear as Spanish dominant and bilingual shoppers don’t seem to be slowing down in their trend of purchasing more items online over previous years.