Lipton Holds Its First U.S. Festival As Part Of 'Be More Tea' Positioning 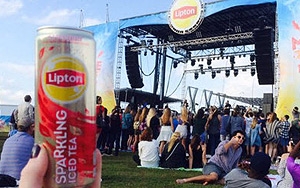 Lipton held its first brand-created U.S. festival on Oct. 24. The event was the latest extension of "Be More Tea," Lipton's first global brand positioning, and the culmination of its 125th brand anniversary activities this year.

The event also featured a 12.5-foot-tall, 2,204-gallon, Guinness World Record-breaking pitcher of iced tea, from which attendees were served (thanks to thousands of pounds of ice used to keep the tea chilled).

The brand is now featuring photos and video clips from the event on its Twitter and Instagram page.

About 10,000 tickets to the event were given away through local radio, retailer and other promotions, reports Melanie Watts, director of marketing at Pepsi Lipton Partnership. The promotional centerpiece was a sweepstakes, featuring prizes of 125 trips to attend the festival, that ran for 125 days earlier this year, in which consumers earned chances to win by posting photos and videos showing Lipton products or registering online.

In the U.S., Be More Tea, targeted to late-stage Millennials, kicked off with a campaign featuring the Muppets, which debuted during the Academy Awards in March 2014.

The campaign has included numerous efforts since then, including a TV spot in which two guys named Carl and Stu sang and danced while distributing bottles of Lipton Peach Iced Tea in a lunchroom and, more recently, a "Tiny Bubbles" ad for Lipton Sparkling Iced Tea.

Watts confirms that Be More Tea — which was created as a "brand philosophy" rather than as a limited-run campaign — will continue to be the foundation for the brand's 2016 marketing.  The slogan is intended to inspire people around the world to "snap out of their routines and embrace each day with a more playful and thoughtful mindset," in Lipton's words.