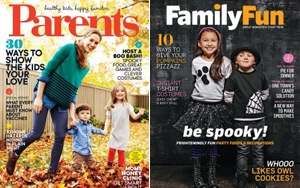 Parenting magazines may have useful editorial content, but no one should be taking their cues from the advertising, according to a study of 3,000 ads which appeared in two of the biggest titles targeting parents, Parents and Family Fun, conducted by researchers at the University of Minnesota.

A good proportion of the ads -- one in six, to be precise -- show children engaging in unsafe behavior, judged by the guidelines of the American Academy of Pediatrics.

Examples of safety violations documented in the study of issues published in 2009-2014 include photos showing children under age 12 in a boat who aren’t wearing life vests, photos showing children riding bikes without helmets, as well as ads marketing medications for children when it hasn’t been approved for their age group by the FDA, according to researcher Cari Nierenberg.

The authors also cited numerous instances of photos showing babies sleeping on their stomachs or sides, when they should be sleeping on their backs -- an important rule for combating Sudden Infant Death Syndrome (SIDS). Other examples related to unsafe toys and feeding practices, as well as ads showing kids using walkers and crib bumpers (both discouraged by pediatricians).

Overall, 59% of the unsafe ads showed practices that could endanger a child’s life.

In an interview published in Live Science, lead researcher Michael Pitt warned that ads serve as models, subtly shaping parents’ views of what is acceptable behavior: “Our concern is that repeatedly seeing images with unsafe practices -- especially in a place where new and seasoned parents look for advice -- can lead parents to assume these activities are endorsed by the experts at the magazines and lead to unsafe practices at home.”

Pitt added: “We suggest the editors consider basic screening of the content in their advertising to ensure the images and products comply with the recommendations of the American Academy of Pediatrics prior to publication.”