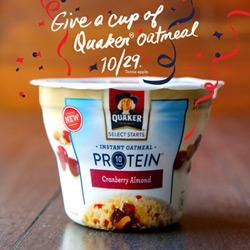 To mark National Oatmeal Day, Quaker will give away 1 million bowls of oatmeal on Oct. 29.

The giveaway is an extension of the brand's new "Off You Go" campaign, which seeks to convey that "every day is a new opportunity, how we prepare ourselves makes all the difference, and Quaker can help you get an ideal morning start," says Joe Silverman, senior marketing director for PepsiCo's Quaker Foods North America division.

The campaign launched Sept. 14 with a TV ad from Energy BBDO, showing a girl maturing into a woman, with help from Quaker nutrition at each step of the way. The ad is running on ABC, CBS, NBC, E!, TNT, TLC, HGTV, Food Network, Bravo and other outlets.

Quaker built awareness of the upcoming giveaway through posts and content on its social media channels. During the week prior to the event, the brand staged two surprise "thank you" breakfasts: one for staff at a daycare center in Chicago, and one for teachers in a New York City school. The resulting videos -- showing the teachers talking about why their work is fulfilling, with footage of the surprise breakfasts intercut -- are being posted on Quaker's Facebook, Twitter and YouTube channels in the days leading up to National Oatmeal Day.

Most of the samples will be distributed as Quaker Oatmeal Cups to morning commuters in cities including New York, Chicago, Los Angeles and San Francisco; and as oatmeal pouches distributed to residential doorsteps, along with morning newspapers, in nine urban markets (New York, Chicago, L.A., Philadelphia, Tampa, Dallas, Phoenix, Atlanta and Washington D.C., and the Virginia suburbs).

In addition, the brand's social media followers and other consumers are being encouraged to visit www.QuakerOffYouGo.com to receive or give someone a free cup of Quaker oatmeal.

In another new campaign initiative, Quaker has partnered with the Brit + Co site on a site area offering #OffYouGo Morning Hacks. The hacks, contributed by online "influencers," include tips for getting kids out the door on time and other ways to make family mornings easier.

While it's too early to get a formal read on the "Off You Go" campaign, Silverman says the anecdotal feedback has been that "it's really connecting with parents" — and tracking is confirming positive sales performance, he tells Marketing Daily.

The hot cereal category is enjoying sales growth, and Quaker ­— the leader, with share of about 58% — is outperforming the category. As of the third quarter, the category was up more than 2%, and Quaker was up nearly 5% compared with a year ago, confirms Silverman.