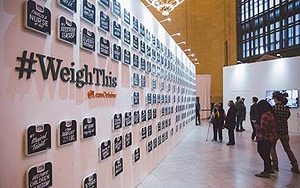 Continuing its new push to reposition from diet brand to healthy lifestyle brand, Nestle's Lean Cuisine this week staged what might be described as commercial performance art (to coin an oxymoron) in New York's Grand Central Terminal.

Some of the messages, celebrating "all the things that women value more than their weight," were submitted by women to the brand in advance, via social media; others were offered by women who stopped to view the installation, which was in place Oct. 26 and 27.

The Grand Central event was an extension of the social media strategy within the brand's respositioning campaign. Dubbed #WeighThis, from the 360i agency, the social push kicked off in late June. That was followed in early July by a new broadcast campaign, "Feed Your Phenomenal," from Grey.

The social media efforts commenced with a 2:25-minute #WeighThis video, showing uncomfortable reactions from "real women" (not actresses) as they were asked to approach a scale, contrasted with their subsequent confidence when asked to describe some of their achievements.

That video, filmed in a closed shoot, was designed to "start a conversation about valuing women's accomplishments instead of their weight on a scale," Julie Lehman, Lean Cuisine’s director of marketing, tells Marketing Daily. With support from paid digital media and several social "influencers," the video has racked up more than 6.35 million views since being released on June 23, according to the brand.

The 30-second version of the campaign's first TV spot shows a Boston-based labor and night nurse, Elizabeth Ryan, enjoying one of Lean Cuisine's new varieties, Vermont White Cheddar Mac & Cheese, after finishing a hectic shift. "I try to live a healthy lifestyle, and Lean Cuisine is really changing it up, so I can eat the way I want to eat," she says.

There's also a 15-second version that includes Ryan, but focuses on spotlighting the brand's new offerings, which are in redesigned packages that call out nutrition messages. (The mac and cheese dish, for instance, is made with "organic pasta," and the Sweet & Spicy Korean-Style Beef is "high protein.")

Both versions of the spot are airing on national TV. With paid digital support, the 15-second version posted on YouTube on July 8 is currently showing more than 13.6 million views on that channel.

The spots are accompanied by a long-form video in which Ryan tells her own life story.

Ryan confirms that more ads are coming in 2016.