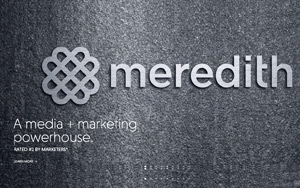 The company attributed this increase to a combination of factors, including its long-term licensing agreement with Martha Stewart Living Omnimedia, giving it responsibility for all MSLO advertising sales and advertising growth at its TV stations.

Total revenues at Meredith’s national media group, including its magazines and related properties, rose 5% from $246 million to $258 million, thanks in part, to a 2% increase in advertising revenues, to $127 million, and a 10% increase in circulation revenues, from $66 million to $72 million.

Both categories benefited from the licensing deal with MSLO, as well as the acquisition of Shape magazine.

Meredith also pointed to major increases in guaranteed circulation during the quarter, with food mag Allrecipes’ rate base growing from 1.1 million to 1.25 million, and EatingWell up from 850,000 to one million.

Looking ahead, Meredith sees total revenues increasing in the low single digits for the final quarter of 2015, with a big increase in national ad revenues offsetting a decrease in local ad revenues, again due to the relative scarcity of political advertising.

Meredith has been adding to its national and local media portfolios over the last year. In addition to its long-term licensing deal with MSLO, first announced last October, and the acquisition of Shape in January, beginning in 2014 the company also acquired TV stations, including WALA-TV, a Fox affiliate serving Mobile, AL and Pensacola, FL, KMOV in St. Louis, KTVK in Phoenix, and WGGB, an ABC affiliate in Springfield, MA.

The publisher also acquired mywedding.com in November of last year.