At Denny's, The Grand Slam Strikes Back 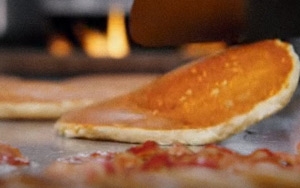 Two take pokes at McDonald's, without actually mentioning the QSR giant. "There's been a lot of talk about all-day breakfast recently," says one. "We like all-day breakfast. Which is why we've been serving breakfast 24/7 since, like, forever."

"There are places proud to serve biscuits and muffins all day," states another. "Meanwhile, at Denny's, we'll be serving made-to-order omelets, skillets and Grand Slams, 24/7. Just like always."

The four spots are being aired in rotation across a full national television buy, and are also being featured on Denny's social media channels, including YouTube.

"With all the recent talk surrounding all-day breakfast offerings, we wanted to simply serve up a reminder that Denny’s is the originator of all-day breakfast," John Dillon, Denny's' SVP and CMO, notes to Marketing Daily. "Whether it’s breakfast for dinner, omelets for lunch or late-night burgers, our menu has always catered to the needs of our guests around the clock."

“While we know brands can react quickly and easily in social media, being timely with a message is equally important in all mediums, from print to broadcast," adds Erwin Penland's chief creative officer, Con Williamson. "Denny’s had something important to say -- and a brand message to convey -- on the topic of all-day breakfast, and they made it come to life in a way that is both timely and relevant, with little lag from conversation to execution.”