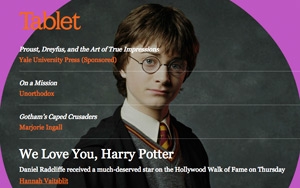 At a time when print publications are going all-digital, Jewish Web site Tablet will launch a print magazine Nov. 27, two weeks before Hanukkah.

Tablet editor in chief Alana Newhouse explained to Publishers Daily that Tablet has an advantage over other magazines: a niche, dedicated group of subscribers.

Although the magazine accepts advertising, its business model relies more heavily on subscriptions.

Newhouse said the ads in the magazine will mostly target their Jewish readership, such as ads from Russ & Daughters, a family-owned shop selling smoked fish, caviar and New York-style specialty foods. Ads from relevant books, art galleries, and commercial advertising will also be in the Tablet, she said.

Newhouse said that though Tablet has been a successful digital publication, Web feels like “a buffet.”

“You go and pick your items, you can graze, you can do it on your own time, and you can take as much or as little as you want,” she said.

Newhouse also noted that the content will be entirely separate from Tablet’s site and will not be available on any digital platforms.

Tablet will offer a mix of news reporting, feature stories, essays and fiction about topics and issues vital to the Jewish community. “We’ve created a print magazine to provide a deep, thoughtful read on the modern Jewish experience,” Newhouse stated.

“It will be a home for long-form reportage, inventive narrative, serious criticism and gorgeous visuals -- the kind of classic magazine we’re all nostalgic for at this point."

Newhouse said she had the idea to start a print edition of Tablet over a year ago, but her plans really came to fruition when she met media veteran Jack Kliger, who read the site and - - after hearing out Newhouse’s plans and chewing it over -- decided he could help take over the business side of Tablet’s print edition. He is now the publisher the magazine.

Newhouse told Publishers Daily she expects readership of Tablet’s print version to be a subset of its current online audience, which generally skews young but is “really all over the map.”

“The print readership is probably going to be a cohort of those readers who are looking for Tablet’s sensibility but in a different format,” she said.

The first issue will include articles like “Play All Day: Miami Beach Jews and the Birth of Modern American Cool,” an 8,000-word memoir by film director and Miami native Brett Ratner describing the decades after World War II when the city was the top destination for wealthy Northeastern first-generation American Jews.

Tablet will also include regular sections, like “The Ten: Listening in as Jews Talk,” in which ten people discuss one specific topic in every issue.  Death is the subject in the first issue, and the "talkers" include Harold Bloom, Jill Zarin, and Kinky Friedman, along with an Orthodox rabbi.
magazines, online publishing
Next story loading