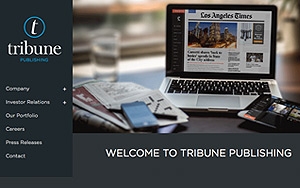 Roughly 500 Tribune Publishing employees have accepted buyout offers from the company as part of a sweeping plan to cut costs and restructure the organization for the digital media age. The buyouts equal 7% of its total workforce of around 7,300, reports Crain's Business Chicago,

Tribune also revealed that prior to the latest round of buyouts, it trimmed almost 300 employees over the course of 2015, for a total reduction of 800 positions across the company during the year.

The new headcount of around 6,800 is down from 7,600 full-time and part-time workers at the end of last year. The buyout figure includes around 100 employees of the flagship Chicago Tribune.

The new figure shows just how far the fortunes of the newspaper industry have fallen over the last decade and a half.

In 2001, its predecessor Tribune Co., including both publishing and broadcasting divisions, had 25,600 employees. By the end of 2013, Tribune’s last year as a combined media entity, that number had shrunk to 11,000.

At the end of 2014, following the separation of the broadcasting and newspaper divisions to form Tribune Media and Tribune Publishing, respectively, Tribune Media both had around 7,600 employees — the increase reflects Tribune Media’s acquisition of multiple local TV broadcast stations.

Earlier this week, Tribune Publishing revealed that total revenues were flat, although advertising revenues fell yet again the third quarter; the ad declines were somewhat offset by growth in circulation revenues.

Tribune also revealed plans to implement metered paywalls for online content at all of its newspaper Web sites, and confirmed its interest in acquiring the Orange County Register from Freedom Communications, which recently declared bankruptcy.