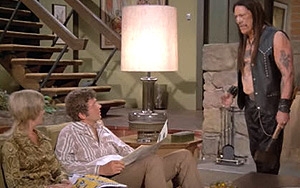 Mars, Inc. has announced that both Snickers and Skittles will air new ads during 2016's Super Bowl L (or 50, if you prefer).

Mars Chocolate North America's Snickers scored big time during the last Super Bowl with the "Brady Bunch" version of its “You’re Not You When You’re Hungry” ads, featuring tough-guy actor Danny Trejo as Marcia (shown) and Steve Buscemi as Jan.

The spot ranked #12 (out of 61 game ads aired) in USA Today's viewer-panel-determined Ad Meter, and won the inaugural Super Clio award for best ad in the game for the BBDO New York creative team. The Snickers-uploaded video is currently showing 14.85 million views on YouTube.

The Brady spoof followed Snickers' initial Super Bowl outing in 2010: the famed "You're Not You" spot starring Betty White, which topped that year's Ad Meter.

Not surprisingly, Mars confirms that 2016's 30-second Bowl ad will be another take from BBDO New York on the "You're Not You" theme, supported by an integrated marketing campaign.

2015's Super Bowl marked Wrigley's Skittles' first appearance, with its "Settle It" ad (ranked #29 by the Ad Meter), featuring a town full of people with oddly muscular right arms and a wrestling match between two guys vying for a lemon Skittles. (That one's currently showing 9.59 million views for the Skittles-uploaded video on YouTube.)

This year's Super Bowl spot for Skittles will also be from DDB Chicago. The brand isn't giving any hints about the ad's content for now, but Matt Montei, Wrigley's senior marketing director, confections and seasonal, said Skittles would again offer "dozens" of integrated Super Bowl party activities leading up to the commercial.

In addition to the ads, the brands are launching the company’s first joint in-store promotion, leveraging their status as official NFL sponsors.

The national promotion, called “Make Super Bowl 50 Even Sweeter,” will kick off on Dec. 28. Consumers will be encouraged to text SWEET50 to 87654 for the chance to win instant prizes (including NFLShop.com e-gift cards and free Mars-brands candies), plus entries for a sweepstakes with a grand prize consisting of everything needed to host "the ultimate" Super Bowl party. The promotion is being supported by national print, radio and in-store media.