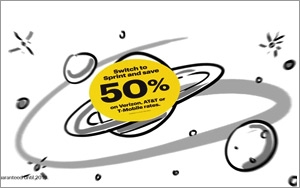 Calling it the “biggest wireless offer in U.S. history,” Sprint has introduced a promotion to woo competitors’ customers by offering 50% off the prices of their current wireless phone bills.

The new promotion, which will launch this week, enables most customers of AT&T, Verizon and T-Mobile to lock into two-year contracts at half of what they currently pay (according to rate cards available from Sprint), and will also pay the customers’ early termination fees. Moreover, switchers will be given a 28-day trial period to test the company’s network and service, and cancel without penalty if they find it lacking.

“We want to do something to persuade people to give us a chance,” Sprint CEO Marcelo Claure said during a teleconference with reporters on Wednesday. “There’s a lot of skepticism about our network, and the only way to convince them [of its strength] is to give it a try.”

Claure differentiated the current promotion (which will run through Jan. 7) from last year’s “Cut Your Bill in Half” effort by noting the addition of T-Mobile (last year’s promo only applied to Verizon and AT&T) and its simplicity.

“The ‘Cut Your Rate Plan’ was good, but it was difficult because we had to evaluate thousands and thousands of bills,” Claure said. The new plan is so easy “even a 7-year-old kid could explain how it works,” he said.

Claure was referring to a video released by the company that features an animated child (known internally as “Fox”) explaining the plan. “I am not kidding guys. This is big,” the kid says. “No tricks. No gimmicks.” The company will employ a full mix of media to promote the offer throughout the holiday season.

“This is all we’re going to advertise,” Claure said. “We’re going to let everyone know and my job is to let every American customer of AT&T, Verizon and T-Mobile know that the plans are available.”

Marketing for the new plan will contain familiar “Sprint World” elements, such as the company’s signature yellow and white colors, to be easily identifiable during the busy holiday season, says Kevin Crull, Sprint’s chief marketing officer.

“You should be able to tell within three seconds that it’s [our ad],” Crull tells Marketing Daily. “We hope we’ve created a graphical platform that is immediately identifiable as Sprint.”

“You have to stir up social, and secondly — and perhaps more importantly, you have to listen to social and amplify [that],” Crull says. “Within minutes of [hearing] chatter we need to amplify in social, we will do that.”

Meanwhile, current Sprint customers will be eligible to receive a free tablet (and one year of service) if they sign a new two-year contract. The perk is designed to reward loyal customers during the holiday season, Claure said.

“It’s a giving time of year, and we hope to have a lot of happy customers,” he said.