Avocados From Mexico On The Move From Thanksgiving Through July Fourth 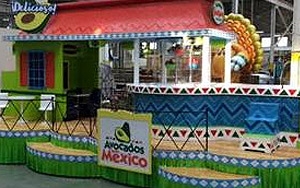 Avocados From Mexico (AFM) — which this year became the first produce brand to drive mass awareness via a Super Bowl spot — is preparing for its second Bowl appearance. But first, it's participating in another iconic American event, with a float in the Macy's Thanksgiving Day Parade.

The ad industry's favorite dark horse also has several other big initiatives on its roster over the next eight months.

The Macy's Parade float (shown) is a rendition of a life-sized Mexican cafe, "with rock sensation Daughtry in tow," according to the brand.

The float is being supported with a promotional "AvoTracker" site with an interactive map, and a social media-driven sweeps. The premise is that social media posts help move the float along on its journey from Mexico to New York City. (In reality, of course, the float is already safely berthed in the parade's warehouse in New Jersey.)

Between Nov. 19 and 25, consumers using Twitter or Facebook to send a tweet that includes #MacysParade and #AVosToNYC earn a chance to win one of five $1,000 Macy's gift cards being given away in daily drawings between Nov. 21 and 25. Other prizes are also being given away, with a combined value of $15,000.

#AVosToNYC has been trending on Twitter, and its levels of social engagement have been second only to #MacysParade, according to AFM's president, Alvaro Luque. As of November 24, #AVosToNYC accounted for 25.3 million of the total 70.2 million #MacysParade impressions generated.

During December, Luque reports, the brand will become the first direct promotional partner with Under Armour's MyFitnessPal weight loss and fitness app, which boasts more than 150 million users. AFM's AvoLifestyle Challenge calls for participants to eat 15 meals that incorporate a serving of avocado during the four-week promotional period. Winners will receive customized nutrition plans created by Evolution Nutrition, and chances to win $500 Under Armour gift cards.

AFM is already preregistering through a challenge area on its site, and MyFitnessPal expects more than 60,000 registrations for the contest. AFM will continue a presence in the MyFitnessPal platform through the end of its fiscal year in June, and is in talks to expand the program for another term.

Data from that initiative will feed into AFM's consumer database, which also incorporates data gathered through mobile and other partnerships, email marketing, AFM's digital advertising (which now accounts for 30% of the association's budget), and 250 (to date) in-store displays that connect with stores' mobile beacons in order to promote downloading an iAvocado app and send custom offers to those who've already downloaded it onto their devices.

AFM is currently running a mobile campaign that sends ads to known avocado purchasers in and outside of the stores with the Web-connected displays, Luque says.

February, of course, brings the Super Bowl — avocados' biggest day of the year in the U.S., thanks to guacamole. Last year, AFM's humorous ad imagined a draft process conducted 4 billion years ago, during which various countries selected their animals and plants, with former NFL stars acting as sportscasters commenting on their picks. The main message was that Mexico is the home of fresh avocados.

This year, the ad creative will stress that only Mexico produces avocados year-round, Luque says. He adds that AFM is working with a new digital agency this year, Richards/Lerma, and plans to preview its Bowl ad somewhat sooner than last year (when it debuted on the Friday prior to the game), as well as implement more pre-game social and digital efforts.

Last year, to drive sales of avocado inventory left in stores after the big game, AFM ran a sandwich-themed promotion the next day. That turned out to be the most successful promotion in the brand's history, according to Luque, so it's no surprise that it's being expanded and honed for 2016.

This time, AFM is targeting Hispanics, and partnering with Bimbo Bakeries, for its "Fanwich" promotion. The promotion, which will employ 20,000 special in-store displays, will receive reinforcement through the Partnership for a Healthier America's produce-promoting FNV campaign, in which AFM is a participant, reports Luque. AFM was among the FNV partner brands that participated in a November 20 FNV live event that featured several celebrity ambassadors, including Jessica Alba, Kristen Bell and Nick Jonas, he notes.

Next up on AFM's calendar: Cinco de Mayo. For that one, it's teaming with Tabasco on a national "Fiesta del Fuego" promotion that will employ shared in-store product displays as well as digital and social components.

In addition, Lucque says, AFM is currently finalizing an agreement with Heineken for a "Grills Gone Loco" promotion for the July Fourth holiday.