Signs of Email Fraud Marketers Should Avoid Using In Campaigns 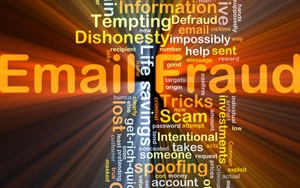 Marketers increase the volume of email sent during the holidays, and along with it consumers will see an uptick in fraud attempts. Here are some common signs of scam attempts in email campaigns to boost open and engagement rates to help you avoid getting caught in spam filters.

"Risk and marketing are two sides of the same coin,"says Jason Tan, CEO and cofounder of fraud detection company Sift Science. Tan says that misbehavior online has caused online businesses to operate like airport security. “Customers are forced to jump through hoops to access content or buy something online,” says Tan. “You want a security system effective in stopping the bad guys but that doesn't do so at the expense of your customers.”

Consumers will be on the lookout for fraud attempts this holiday season, and email marketers should avoid the following five email mistakes that might alert their subscribers.

Hackers often send emails from fake Web sites that mimic reputable brands by adding or changing a few characters in the email address. For example, a hacker might send an email from Amazon.biz or Amazon7.com instead of Amazon.com.

Fake email addresses and URLs without a company's full, proper name are both signs of scam attempts. Unbranded content can also offer a clue to fraud, such as a lack of a company logo or incorrect branded coloring.

Marketers should ensure their messaging is consistent, aligns with company branding and comes from a correct and standardized email address to avoid appearing fraudulent.

A typo is the bane of every writer and a common feature of scam emails.

Many hackers actually include misspelled words on purpose. “While it may seem that this would easily reveal an illegitimate email, it is actually a tactic used to find less savvy users,” states security company Return Path in a blog post. “Spammers have learned that if they get a response from a poorly written email, they are on to an easy target and will focus their efforts to bring that user down.”

Attachment-based attacks were the most popular hacking tactic of 2015. Malicious attachments are a favorite feature of phishing scams, and often include a Microsoft Word document that contains a virus delivered by the Dridex botnet.

Another clue to a scam attempt is emotion and uncharacteristic messaging that expresses urgency or a demand. Any email that asks for personal information, such as an account number or social security number, or demands a payment is likely fraudulent.

Email marketers should ensure that their messaging, even when promotional in nature, is never too demanding of a subscriber and never contains an attachment.

Message formatting becomes increasingly important. Proper email marketing campaigns should be sent to an individual and should not contain addresses either cc'ed or bcc'ed, which is a common sign of fraud.