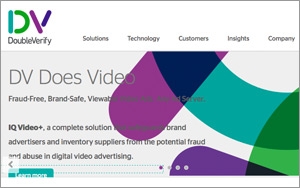 Ad-quality firm DoubleVerify is launching an in-app viewability solution with Israeli mobile marketing firm Ubimo to ensure “consistent and scalable viewability measurement across the widest range of inventory sources,” per a release.

The solution, researched and developed by both companies, will launch on Ubimo’s platform, which layers contextual data and location-based data to inform marketers in real-time.

DoubleVerify CEO Wayne Gattinella said in an email that it’s critical to authenticate media quality across channels and platforms, including in-app mobile ads, which he said can only be done by a third party like DoubleVerify that offers a complete view of campaigns.

“Advertisers want the same transparency and assurances for their mobile ad campaigns [that] they employ across their display and video buys,” Gattinella said, adding that the company is building partnerships with mobile platforms like Ubimo to authenticate media quality where clients are investing media dollars.

Beginning in 2016, DoubleVerify -- as well as Moat, Integral AdScience, comScore -- is on the Google-selected list of third-party vendors approved to report ad viewability on YouTube.

In May, Ubimo announced it closed a $7.5 million Series B round of funding, which the company said it intended to use to double down on its self-serve programmatic mobile ad platform.