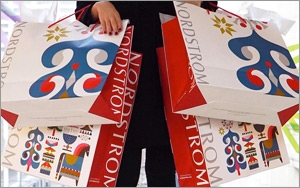 A surprising group of retailers are dominating social media conversations and engagement so far this holiday season, led by Nordstrom, Macy’s and Sephora, according to Shareablee Social Scorecard. Kohl’s came in at a much more distant fourth place, followed by Amazon.

The rankings, which are based on combined analysis of total actions —shares, comments, retweets, and reblogs — on Instagram, Facebook, Twitter and You Tube, show an overall 26% increase in engagement and 170% jump in actions this year. This is despite a sharp decrease in posts featuring Black Friday deals, which fell 32% on Facebook and 27% on Twitter.

“What really stood out to us this year is the rise of the specialty store, and not so much the mass marketers,” says Shareablee's founder and CEO, Tania Yuki. “I was expecting to see Walmart and Target ranked much higher, and instead we saw exceptional strength in brands like Nordstrom, Sephora, Barney’s and Neiman Marcus.”

She tells Marketing Daily that while there is still plenty of debate about when — or even whether — social engagement translates to sales, “what I see is that when a company is performing well in social activity, it’s got digital prowess, and they are setting themselves up to succeed in e-commerce. It’s another way of assessing, ‘How digital are these companies? Are they going to make the transition from physical to e-commerce sales? Are they putting their dollars and expertise into digital differentiation?’ Those that are doing well are setting themselves up for the long haul, as more sales shift online.”

Leading into the holiday weekend and in the days after, Nordstrom came in at first place for the second year, registering a 119% jump in engagements, claiming the top place on both Facebook and Twitter. And Sephora ranked second, leading Instagram with 1.5 million social actions.

Surprisingly absent from the front-runners in the early weeks were Walmart, Target and Amazon, although the Internet giant did rise to fifth place in the days following Thanksgiving. Yuki says that while clearly, millions and millions of people shopped there, social engagement measures  shopper enthusiasm. “And these large retailers are sort of ‘everything’ stores. Consumers already see them as relatively seamless and ‘always on.’ They’ve just become part of people’s everyday shopping experience.”