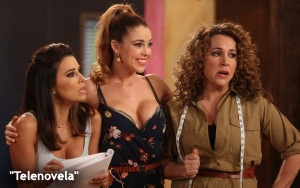 Maybe it means I’ve watched way too much television in my life, but when I can predict lines of dialogue and bits of physical comedy in a TV show right before they happen, then that doesn’t bode well for the show at all.

“Predictable” is not an attractive quality for a TV show. In the context of a TV script, it is synonymous with hackneyed, clichéd, been-there-done-that -- all adjectives applicable to this new comedy series premiering Monday night on NBC called “Telenovela.”

As I watched the premiere episode last week, I predicted what would happen at least four times during the episode’s 22 minutes. As far as I can recall, that’s a personal best.

Produced by and starring Eva Longoria, “Telenovela” is a spoof of the prime-time soaps that are a staple of Spanish-language television. Uh-oh, that’s another red flag -- the dreaded spoof. It’s not that I have a blanket aversion to satire, but scripted TV shows styled as spoofs of some other kind of TV show never work for me.

Longoria plays Ana Sofia Calderon, the star of the fictional soap within the sitcom titled “Las Leyes De Pasion.” I think that translates to “The Laws of Passion,” but I’m not sure. A Google search for a translation was not conclusive. And NBC didn’t bother providing a translation -- or the name of this fictional soap for that matter -- in the description of “Telenovela” that the network posted on the media Web site it maintains to help journalists.

That’s not the only mystery about this show’s premise. For comedic purposes, Ana Sofia -- the star of this fictional Spanish-language soap -- does not speak Spanish. On the face of it, that’s funny. But it raises a very real question, which is: How can she work on a show in which the dialogue is in Spanish, and it presumably airs on Spanish-language TV? Upon close inspection, the language-barrier bit doesn’t really work.

And for that matter, what is the nature of this fictional TV network? You’re supposed to assume it’s Spanish-speaking. But details about the network are hard to come by on the show. And basic facts about it are nonexistent on NBC’s detail-averse press site.

If you pay attention while watching “Telenovela” (that is, if your mind doesn’t wander elsewhere), you will learn that “Pasion” is the name of the character Ana Sofia plays on the show. Predictably (there’s that word again), Longoria plays the character as a temperamental diva who is overly protective of her status as the show’s queen bee. As a result, she overreacts like a madwoman whenever her status seems threatened. We’ve seen this type for decades in various soap spoofs, from Sally Field in “Soap Dish” on up.

With back-to-back episodes airing Monday night (Dec. 7), at 10 and 10:30 Eastern, NBC is introducing “Telenovela” in the same way it introduced another comedy, “Superstore,” last Monday. Both sitcoms have their “official” premieres on Monday, Jan. 4 -- “Superstore” at 8 and “Telenovela” at 8:30.

Scheduling these shows in tandem on the Monday night schedule next month is kind of another mystery. The shows have nothing in common – especially their settings, subject matter and the quality of their comedy. Where “Superstore” was comedic and charming, “Telenovela” is charmless -- like spending 30 minutes listening to one long shriek.

How do you say “bomb” in Spanish? Bomba?