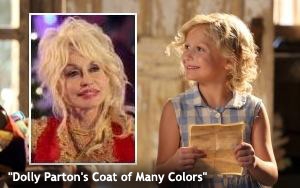 One of the curiosities of last spring’s upfronts in New York was the amount of time NBC devoted to Dolly Parton at the network’s presentation at Radio City Music Hall.

Here was this network promoting its programming as squarely aimed at a “younger” demo of 18-49 adults -- a target presumed to be more urban than rural -- and it was giving a showcase lasting 15-20 minutes to this 69 year-old country music star from Tennessee.

The reason for all the attention paid to this siren of the Smoky Mountains was the announcement that Parton would produce a series of holiday-themed movies based on her songs. Lo and behold, at least one of these movies has actually happened. It’s called “Dolly Parton’s Coat of Many Colors” and it airs Thursday night.

It too is a curiosity -- a made-for-TV movie about poor country folk in the 1950s who grow tobacco (and smoke it too), dine on squirrel, and battle to maintain their Christian faith in the face of hardships that border on biblical. Among other things, a sudden plague of predatory worms threatens to destroy an entire season’s crops. The crops survive, only to become threatened anew by a conspicuous lack of rain. Fortunately, it rains just in time -- an answer to a prayer.

But I’m getting ahead of myself. “Dolly Parton’s Coat of Many Colors” is based on a song written by Dolly of the same title (minus the words “Dolly Parton’s”). The song is about a multicolored coat her Mama sewed for her out of colorful, random scraps of cloth when Dolly was 8. It was a project of love, but when Dolly proudly wears the coat to the country schoolhouse she attends, a family of bullies makes fun of her, strips her of the coat and locks her in a cloak closet.

This makes little Dolly angry at her mother and at the Lord himself. In one scene, feisty little Dolly has a confrontation with God in which she faces the nighttime sky, calls God a bully and spits at him. Later, though, she’ll get a chance to change her opinion of the Lord Almighty and learn a life lesson about faith.

There’s nothing wrong with that, of course. We all love a good life lesson. It’s just that NBC in particular and network television in general are not exactly known for imparting life lessons, especially lessons about faith, Christianity, God, and to some extent, tobacco. Thus, in the context of network TV, “Dolly Parton’s Coat of Many Colors” sticks out like a sore thumb.

In stories and reviews about this movie that you might come across this week, you might see the word “heartwarming” used all over the place to describe this movie. And it is heartwarming in spots. But if you’re a cynic -- or an urbanite more accustomed to the violent dramas and snarky insult comedies usually seen on networks such as NBC -- you’ll wonder if your remote control has made some sort of mistake identifying this network airing a Dolly Parton Smoky Mountain faith movie as NBC.

You’re not likely to encounter Dolly herself, however, unless you do your grazing at the beginning or at the conclusion of this movie. She’s seen in both of those parts, introducing the movie from the Dollywood theme park she established in Pigeon Forge, Tenn., not far from where she grew up. At the movie’s end, she sings the title song.

The Dolly role in the movie goes to a precocious 8-year-old named Alyvia Alyn Lind, who is so charismatic she makes Shirley Temple seem like the dullest child you ever met. She’s a terrific child performer, but if the character she plays -- the young Dolly -- is how Parton sees herself as a young girl, then Dolly has quite a high opinion of her young self.

The young Dolly in the movie is wise beyond her years, talented beyond anything anyone in the community had ever experienced (which might actually be true, judging from the career Parton later made as a singer and songwriter), and the beaming light of her family’s life, if not the entire Smoky Mountain region.

Still, there are worse things you can watch on TV than “Dolly Parton’s Coat of Many Colors.” Despite its shortcomings, its heart is in the right place.

Also in the cast: Ricky Schroder as Dolly’s father, Jennifer Nettles as her mother, and Gerald McRaney as her preacher grandfather.