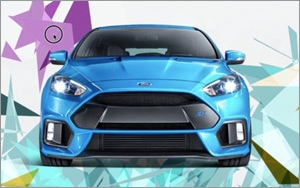 Ford, which launched its "By Design" campaign, via Team Detroit in October, is extending it in a rather literal way, by letting consumers design artwork for digital billboards that will go up in major cities nationwide, from Times Square to the San Francisco Bay Bridge.

Essentially, consumers can use digital tools to create an ad that aligns with the campaign theme, and see the ad on major-location out-of-home digital boards. To participate, consumers must go to www.FordByDesign.com, on desktop or mobile devices, select one of six major cities and a Ford vehicle to make the focus (no pun intended) of the ad.

The page offers a range of design motifs, like fractals and smoke, and a color palette. When the user’s creation is submitted, Ford will then display it to a billboard in the city chosen by the artist. Along with the user’s design, the billboard will also display the artist’s first name and hometown. Locations include Times Square, the Bay Bridge, Los Angeles, Miami, Chicago and Washington, D.C. Once the ad is live, consumers get a webcam shot of their design in the chosen location from cameras across from the billboards. After the consumer receives the image, they can take it social.

Lisa Schoder, Ford digital marketing manager, says the automaker is using technology on the digital boards that is typically used for proof of buy for advertisers. “We did work behind the scenes to make use of the camera but in a consumer-friendly way to get feedback.”

The plan, she says, is to run through the end of the year, “But since we have the system in place we could easily continue it. In the first quarter next year we will be taking it deeper about what 'By Design' means and communicating that. And [the out-of-home consumer design] campaign ladders up to that.”

The By Design campaign is Ford’s first umbrella campaign for Fiesta, Focus, Fusion, and Mustang. The campaign is running four TV spots. One shows the factory-tuned version of Focus, the Focus RS, doing donuts. Another Focus spot looks at the electric plug-in version around the theme of fun to drive, as the car screeches up to a charging station. The third one shows the growl of a mustang engine, and the fourth looks at the styling statement of the Fusion sedan.

“These are 15-second spots, so we wanted to communicate singular messages to capture the idea,” says Schoder, who adds that as the campaign evolves it will continue to be a multichannel effort, “but key messages may shift into what it really means to tell that story.” One technology the campaign is likely to focus on is the new Sync platform, allowing hands-free Siri use. And, said Schoder, Ford.com has a new look and feel across the entire car portfolio.