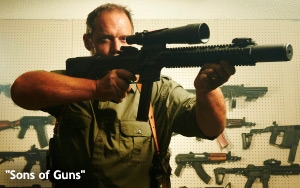 A home-shopping network on TV selling guns? Why not? TV is gun country. Get used to it.

The media was all atwitter earlier this week over the news that a pair of entrepreneurs are preparing to launch a home-shopping TV service specializing in personal weaponry.

I have no idea what triggered this spate of stories this week, since I am not evidently on the press list for this new gun network. But I can guess that since all of these stories appeared at the same time, some sort of press release must have gone out announcing that this network -- unimaginatively named GunTV -- will launch in January.

I am not sure how new this news really is. GunTV already has a Web site indicating that the gun-shopping network would start up in “fourth-quarter 2015,” which would be right now. Perhaps the company has hit a snag and now must put off the launch of its televised gun market until next month. That's unfortunate, what with Christmas gift-giving and all that. Oh well.

The Web site doesn’t give that much information about this new venture. One thing it does reveal, however: The entity overseeing GunTV is identified as “the Social Responsibility Network” -- a name some might question.

This week's stories indicate that GunTV will start with just six hours of programming a day, with plans to eventually work its way up to more hours. Much of the GunTV Web site is given over to enlisting the participation of gun manufacturers and marketers. The site asks interested parties to get in touch to discuss this new opportunity for selling their wares.

There's no way of knowing how widespread this network will be. This is the only statement about television distribution that you'll find on the GunTV Web site: “The Social Responsibility Network's GunTV live shopping channel … will include a line-up of firearms and related consumer outdoor products and programming broadcasting live on satellite systems Nationwide [sic].” There's no word on cable carriage.

Unsurprisingly, anti-gun advocates were up in arms over the prospect of yet another means for people to buy guns in this country. And yes, this country's seemingly easy access to armaments is a problem -- particularly when it comes to acquiring weapons and ordnance that would not seem to have a home-protection or sport-hunting purpose, such as the assault rifles apparently used by the San Bernardino killers, for example.

But I'm not here to debate gun laws, gun policies, or the Second Amendment. I'm no expert on those things. But I am reasonably knowledgeable about TV. And when it comes to guns, a home-shopping network devoted to them should feel right at home.

Why? Because TV bristles with guns. Talk about an environment for gun manufacturers and marketers: Guns are front and center on a great deal of the entertainment programs people watch.

And yet, you don't see gun marketers advertising on these shows. That strikes me as hypocritical since many TV shows today are veritable showcases for gun ownership. On drama after drama, victory in all sorts of confrontations goes to those who have guns and possess the wherewithal to use them.

On other shows, the pleasures of gun ownership as a hobby are demonstrated time and again as gun enthusiasts apply their personal firepower to blasting cans, bottles and fenceposts on shows such as “Sons of Guns” on Discovery Channel (photo, above).

Some of the sports networks air hunting shows in off hours such as early mornings on weekends. Marketers of various sporting goods advertise on these shows. Maybe guns are part of the advertising mix here, but it's doubtful the armaments being marketed are military-grade assault weapons.

For that matter, no one in the GunTV stories is saying this new gun shopping network intends to traffic in military hardware. On the contrary, the wares to be displayed and sold on GunTV will more than likely be those desired by the typical backyard gun enthusiast who likes owning a couple of pistols, a shotgun and a long rifle or two, for shooting at inanimate objects and live animals in season.

This is America, after all.

tv
1 comment about "Gun Shopping Network Should Feel Right At Home On Gun-Saturated TV ".
Check to receive email when comments are posted.
Next story loading