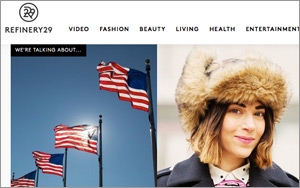 Refinery29 has appointed Amy Emmerich to the newly created position of chief content officer. Emmerich will oversee a 150-person team and drive content strategy and distribution across channels as the brand scales globally.

Emmerich told Publishers Daily her goal is to "dive into new topics while maintaining our unique voice." She promised the site would use its "best in class creative to speak with integrity" to millennials.

“We’re living in a moment in media where content creation, monetization and distribution are being reconfigured," stated Philippe von Borries, co-founder and co-CEO of Refinery29. He cited Emmerich's "perfect blend of traditional and digital experience" to navigate a changing environment.

Emmerich was most recently EVP of programming. Since joining Refinery29 in December of last year, Emmerich built the video team, launched a number of original series and led content programming across new distribution partners, including Snapchat Discover, registering a major uptick in monthly video views.

“As Refinery29 continues to grow both globally and across platforms, it’s vital that we maintain our unique voice while continuing to be an organic part of our users’ lives,” Emmerich stated.

Barberich will work with Emmerich to infuse Refinery29’s editorial voice in new markets, focusing on Refinery29’s global expansion. The site announced its UK launch in November and will open in Germany and France in early 2016.

As global editor in chief, Barberich will also work on brand development. The new leadership structure follows a year of strong growth for Refinery29, which has increased its revenue to more than $80 million/year.
management, web sites, women
Next story loading