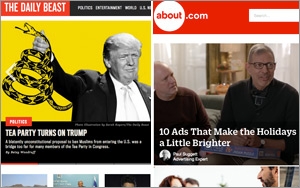 One of the world’s biggest online media and Internet companies, IAC, is launching a new digital publishing network bringing together its portfolio of properties under one roof.

The new company, called IAC Publishing, includes major digital publishing brands like About.com, Dictionary.com, Investopedia and The Daily Beast, which together reach over 100 million unique monthly users in the U.S.

In organizational terms, that means moving About.com and several other sites from its “Search & Applications” segment and merging them with news site The Daily Beast.

The new organization is intended to help raise the profile of IAC properties and make it easier for advertisers to buy inventory across the network. It will also make it easier for them to benefit from IAC’s investments in data infrastructure as well as new advertising technology and products.

The company hopes to capitalize on the momentum of its existing ad sales efforts. According to IAC, premium ad sales at About.com have increased by 30% year-over-year, while The Daily Beast’s in-house creative outfit, BrandBeast, is crafting custom content campaigns for ad clients, including Land Rover, Fitbit, National Geographic Channel and Delta Air Lines.

Back in September, Q.Digital, formerly known as GayCities Inc., consolidated its existing properties, GayCities and Queerty, with recent acquisitions, LGBTQ Nation, Dragaholic and Bilerico Project, under the Q.Digital brand.