As Year Comes To An End, NBC News Sails In Calmer Waters 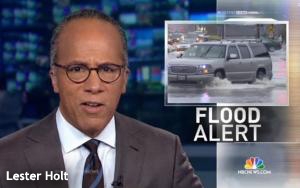 Wasn’t this the year that NBC News was supposed to be in turmoil?

The year passed so quickly, and yet the Brian Williams scandal that made headlines for weeks last winter and spring seems like it happened so long ago.

Cut to the present day and Williams is on MSNBC, and “The NBC Nightly News” that he used to anchor is firmly in first place with Lester Holt.

And the news division’s other trouble spot -- “The Today Show” -- is winning the demographic race with rival “Good Morning America” at ABC. It wasn’t that long ago that NBC was feeling the pressure from a greatly rejuvenated “GMA,” which had toppled the NBC show from its long-time position at the top of the morning-show ratings.

For a time, NBC had the option of drastically recasting “The Today Show,” and was said to be considering it. One reason was that Matt Lauer’s contract was up for renewal last spring. The network might have decided then to jettison Lauer and his expensive salary, but instead came to an agreement on a new contract in June. The network also stayed with Savannah Guthrie, Al Roker and Natalie Morales, and here we are.

Let the record show that “GMA” still tops “Today” in total viewers. But in the demos -- 18-49 and 25-54 (the latter being the primary target of these network morning shows) -- “Today” is the time-period leader.

In ballyhooing these results in a press release on Dec. 4, NBC noted that the total-viewer gap with “GMA” had narrowed significantly since November 2014.

So why did this happen? I’m not a very good theorizer, but a couple of thoughts come to mind. Where the “Nightly News” succession was concerned, the smooth way that Lester Holt moved into the anchor chair demonstrates the benefits of having a high-quality bench, to borrow a term from the sports world. Holt was already seasoned, already well-known to his audience, and a very natural fit. The newscast is in good hands.

With “The Today Show,” it’s a cliché perhaps to apply the old tortoise-and-hare saying here about “slow and steady” winning the race. But in a way, NBC’s willingness to stay the course with its lineup of familiar personalities -- in effect, to wait and see what might happen over the course of six months or a year or more -- turned out to be a shrewd move.

The other night, a network executive gave his own theory, which is that all of the network morning shows traffic in fluff pieces, celebrity interviews, cooking segments and the like, but when it comes to those days when serious news stories loom large, “The Today Show” pivots to hard news better than “GMA.”

The folks at ABC News would probably disagree with that assessment, but the point was that many people do turn to NBC News when big stories break, which might be one reason why “Nightly News” is No. 1 also.

I’ll say this about the evening-news numbers above: When you look at the numbers for all three newscasts, you form the impression that “network news” -- one of the bedrock institutions of TV -- is holding its own. And while some worry about the aging of the network news audience, the 18-49 numbers reported above indicate that the situation might not be so dire. Those demo numbers are on par with many prime-time shows that the networks promote as big hits, on the basis of numbers just like those.