Williams Or Letterman? It's A Toss-Up For TV Story Of The Year 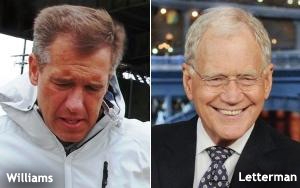 David Letterman’s farewell was sentimental. Brian Williams’ flameout was spectacular. So which one was the best TV story of 2015? I’ll call it even.

Technically, the Williams story was the better news story. The revelations that this trusted news anchor had been a teller of tall tales concerning some of his exploits covering hot spots from the Middle East to New Orleans came as a big surprise.

And the drama that followed had everything you look for in a big TV story: A top star in trouble, corporate intrigue, a big-money contract, disciplinary action (a suspension, oh my!). For a substantial chunk of the year, this story made headlines, and rightly so.

The end of the Letterman era was no surprise, however, since Letterman, 68, had announced it more than a year earlier. Still, his final “Late Show” last May was one of the standout TV shows of the year, and it marked the conclusion of a generational shift in late-night TV that had been in the works since Jay Leno, now 65, relinquished “The Tonight Show” to Jimmy Fallon, 41, the year before.

Few people seem to recognize it as such (other than me), but the duel of Leno and Letterman in late-night TV represented an era all its own -- stretching roughly from 1993 (when Letterman debuted on CBS) to 2014 (when Leno left NBC). Now that’s over.

Letterman’s absence is particularly acute at this time of the year, when he would traditionally feature Darlene Love singing “Christmas (Baby, Please Come Home)” and Jay Thomas retelling his famous “Lone Ranger” story. “If everything could ever feel this real forever,” sang the Foo Fighters on Letterman’s final show last spring. “If anything could ever be this good again …” Alas.

The generational late-night shift involved cable too, as Jon Stewart, 53, left “The Daily Show” in August, and was replaced by Trevor Noah, 31. Stewart’s exit was the end of an era of its own -- the Stewart-Colbert era on Comedy Central, 2005-2014 (the years of “The Colbert Report”), which was a good deal shorter than the Leno-Letterman epoch.

What else characterized the year in TV in 2015? In the programming arena, there were more hits than misses. Clunkers included “The Slap” and “Heroes Reborn” on NBC, “Happyish” on Showtime, “Wicked City” on ABC, “Scream Queens” and “The Minority Report” on Fox, and “Bessie” on HBO. The bright spots included PBS’s Walt Disney documentary on “The American Experience,” “Fargo” on FX, “UnREAL” on Lifetime and “The Jim Gaffigan Show” on TV Land.

We said goodbye to “Mad Men” and “Nurse Jackie” and endured another season in the company of TV’s grumpiest protagonist, “Ray Donovan.” We scratched our heads over the announcement that Netflix is producing an updated version of “Full House” called “Fuller House,” demonstrating that even Netflix -- which no critic dare criticize -- isn’t immune from the disease of dumb ideas. “Full House,” really? The original sitcom was a piece of prime-time junk. The new version will be no better.

TV oddities from the past year included WeTV’s “Sex Box,” which featured couples entering a box with a bed in it and then coming out later to reveal what they did with each other therein. Another one-off concept -- the TLC show called “My Husband’s Not Gay” -- drew criticism from gay activists, but was quickly forgotten soon after it aired.

Rosie O’Donnell was also quickly forgotten after she rejoined “The View,” stayed for a while, then suddenly quit. In one of the stranger stories in TV during the past year, HBO took over “Sesame Street.” As the kids say these days: “WTF?!”

NBC announced it was severing all ties with Donald Trump after he labeled Mexican immigrants as rapists when he announced his candidacy for president in June. NBC’s ban lasted all the way until this fall, when the network invited Trump to host “Saturday Night Live” and ratings soared. As Joe Pesci said in a world-weary voiceover in “Casino,” “Always the dollars, always the [expletive deleted] dollars …”

The saddest TV story of the year was the fatal shooting of two young newspeople working a feel-good story on an otherwise pleasant and routine August morning on WDBJ in Roanoke, Va. How do you make sense of something so senseless? You don’t -- which is one of the reasons such stories are so terrible.

As in other years, TV was filled with far too many stories about senseless killings in 2015 -- from Roanoke to Paris to San Bernardino. At this time of year (or any time of year), it’s appropriate to hope the coming year brings better news.

tv
2 comments about "Williams Or Letterman? It's A Toss-Up For TV Story Of The Year".
Check to receive email when comments are posted.
Read more comments >
Next story loading