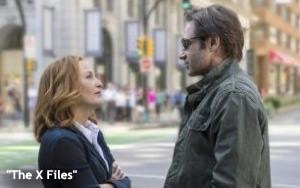 It’s a mystery worthy of “The X Files.” Why is the title of the first episode of the upcoming reboot of the series the same as Adolf Hitler’s autobiography, one of the most reviled books in human history?

Hitler makes no appearances in the show. Nor is he referenced at any time. No other infamous personalities of the Third Reich, or any of the regime’s symbols such as swastikas, are seen either. Hitler’s book isn’t mentioned in the show -- either by its German title, “Mein Kampf,” or its English translation, “My Struggle.”

But “My Struggle” happens to be the title of the episode, which is scheduled to premiere on Fox on Sunday, Jan. 24, following the NFC Championship Game scheduled to air in prime time that evening. The episode is the first of six for this new “X Files,” which originally ran from 1993 to 2002 on Fox. David Duchovny and Gillian Anderson are both back as FBI agents (now former agents) Fox Mulder and Dana Scully, respectively. Mitch Pileggi is back too, as FBI assistant director Walter Skinner.

Since I immediately connected the title “My Struggle” to Hitler’s Nazi manifesto after reading the title in a Fox press release, I watched a preview DVD of the episode earlier this week with an eye out for Nazi references and symbolism in the show. I found none, although it’s also true that the episode is filled with notions of world conquest that would be carried out by forces described as ruthless in the pursuit of their goal. This description bore a resemblance to Nazi Germany.

In the show, this apocalyptic vision is articulated by an extremist TV personality and conspiracist named Tad O’Malley, played by Joel McHale. When he delivers a soliloquy about the nefarious forces conspiring to take over the earth -- among them big business, the wealthy, the government -- video clips are shown that link certain public figures from recent history with this plot, most notably George W. Bush.

So if George W. Bush is positioned as a leader of this conspiracy for global conquest, is “The X Files” positing that Bush is Hitler? I admit that’s a stretch, but who knows? Others who come in for criticism include Bill O’Reilly, who Mulder accuses O’Malley of emulating.

“You think I do it for the ratings,” O’Malley says.

“I think you’re the ‘The O’Reilly Factor’ with a shopworn little gimmick,” replies Mulder.

To which O’Malley replies: “What Bill O’Reilly knows about the truth can fill an eyedropper!” Ouch.

But wait -- there’s more. A press rep at Fox informed me the episode isn’t named after “Mein Kampf” but after another book (or more specifically a series of six autobiographical novels) called “My Struggle” by a Norwegian named Karl Ove Knausgaard. In Norwegian, it’s “Min Kamp.”

It would take a lot more space than would be appropriate here to fully explain this book series, but the books have to do with this author’s intellectual and emotional struggles. They were published from 2009 to 2011 and, among other things, they deal with the author’s battle with depression.

In the “X Files” premiere, Mulder is described as being depressed too, so this is the reason given for using “My Struggle” as the title for the episode, according to the Fox press rep. She e-mailed me a quotation from an executive producer of the show, Gabe Rotter, who said the title reflects what the episode is about. “It’s about the tedium of Mulder’s post-FBI life and his battle with depression,” Rotter said.

However, unless I wasn’t paying close enough attention, Mulder’s “struggle” with depression barely registers in the episode. So a conspiracist (or a TV columnist) is left to wonder: Are these Norwegian depression books really the inspiration for this show’s title? Or is it the more notorious “Mein Kampf” by Adolf Hitler?

People think it’s easy to be a TV columnist. Obviously, it’s not -- at least sometimes.

tv
1 comment about "Mystery of 'X Files' Episode With Same Title As Hitler's Autobiography".
Check to receive email when comments are posted.
Next story loading