For A TV Columnist In 2015, Trump Was The Gift That Kept On Giving 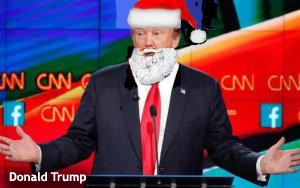 When Trump announced his candidacy for president on June 16, I had a feeling the future looked golden for those of us in the business of contriving TV columns every day.

He started the ball rolling with his sweeping generalization about the criminal intentions of Mexican immigrants, and the Trump phenomenon just snowballed from there.

For me, the bounty that was Donald Trump in 2015 yielded 15 of these Television News Daily blog posts, including this one. There were the Republican debates to talk about, of course, but also columns on Trump's TV history (“The Feuds! The Firings! Trump's History Of Hilarity On TV”), his infamous banishment of Univision employees from one of his his Florida golf courses (“No Golf for You! The Case For President Trump”), his exile from NBC following his statements about Mexicans (“Easy Solution To NBC’s Trump Problem: Sever All Ties With Him”), and his triumphant return just a few months later as a guest host on Saturday Night Live (“Trump on ‘SNL’: His Whole Life Is A Satire”).

I wrote assessments of Trump and the other candidates when they appeared on the late-night shows, noted the irony that Trump would be replaced as star of “The Celebrity Apprentice” by an immigrant, Arnold Schwarzenegger, and pointed out how Trump's popularity seemed to grow rather than decline every time he made headlines with an outrageous statement.

Following the odyssey of Donald Trump was one of the singular joys of working the TV beat this year. But of course, he had always been barrels of fun for a TV columnist, ever since the premiere of the first season of “The Apprentice” in 2004.

Back then, “Mr. Trump” -- as he preferred to be addressed -- formed the habit of doing his own publicity. So my co-workers and I in the TV department of the newspaper where I formerly worked became accustomed to these phone calls from Mr. Trump on the morning after an episode of “The Apprentice” aired on NBC.

The phone would ring and a Trump assistant would instruct you to hold for Mr. Trump and seconds later, he was on the phone telling you about the colossal ratings “The Apprentice” scored the night before -- ratings so stupendous that the show was “No. 1” in every category.

“It's amazing!” he would declare, using the word -- “amazing” -- that we would use in our mimicry of him after the calls were over. “Nothing can beat us!” he would exclaim, and he would have us believing that was true right up until a short time later when the overnights would arrive in our own inboxes and we would see that “The Apprentice” did pretty well, but was rarely “No. 1,” and if it was, it was not by much.

We were not particularly concerned about The Donald's penchant for exaggerating the Nielsen ratings because my colleagues and I had been around the TV business long enough to know that this kind of bombast was par for the course.

It's the same way in the political arena, I suppose -- all candidates for political office seem to traffic in outrageous statements and exaggerations, whether they believe in them or not, or whether or not they are true.

I don't have any idea -- or would pretend to have the appropriate level of wisdom required to judge  -- whether Donald Trump's habit of puffing up the ratings for “The Apprentice” reveals that he has an uneasy and obviously dysfunctional relationship with the truth. Nor would I ever venture a guess, based on my own limited personal experience with him, as to whether he would make a good president or turn out to be the most disastrous chief executive this country has ever known -- which would be saying a lot.

I just know that there is something about Donald Trump and television that are extremely well-matched. I've said it before in these blog posts about Trump, and I'll say it again: He's beating his competitors because he's so much more comfortable on TV than they are.

While they fret about deciding which interview invitations to accept and which to turn down, Trump basically says yes to everyone, doesn't pay much attention to preparing in advance and just says whatever seems to pop spontaneously into his head.

The ease of booking him, plus the viewership he draws, means the news shows and talk shows will continue to have him on for as long as his presidential run lasts. And TV columnists will have plenty to write about next year.

politics, tv
3 comments about " For A TV Columnist In 2015, Trump Was The Gift That Kept On Giving".
Check to receive email when comments are posted.
Read more comments >
Next story loading