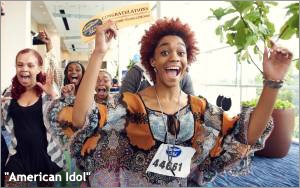 The season premiere had everything we have come to expect from “American Idol” -- right up until a surprise appearance by Kanye West ruined the entire experience and the show.

And as if that wasn’t enough, his wife Kim Kardashian had to show up too. After nearly two hours of upbeat “Idol” auditions, most of them featuring wonderfully talented ordinary Americans from all walks of life, this celebrity couple enters the picture just before the end of the show to throw a wet blanket on the whole thing.

Earth to Fox: “American Idol” is about regular people -- some with talent, some not -- with aspirations for making it big in the music business. Ever since “Idol” emerged as TV’s first talent-competition mega-hit in 2002, we’ve thrilled to the spectacle of fresh-faced aspirants receiving their “golden ticket” to move on to the competition in Hollywood -- auditioners such as the young woman in the photo that accompanies this blog post.

In this context, springing celebrity nut job Kanye West on the unsuspecting “Idol” audience -- made up in large part of families with children -- to perform a profanity-laced rap song is the kind of lapse in judgment that only a TV network could make.

It happens in the final five minutes or so of the two-hour premiere of “Idol” scheduled to air Wednesday, Jan. 6, from 8 p.m. to 10 p.m. Eastern on Fox. The episode kicks off the 15th and final season of “Idol,” which is calling it quits for good when it concludes in May.

As is customary for all of the shows in the first weeks of any “Idol” season, next week’s season premiere is a showcase of auditions. On this episode, the auditions were held in Atlanta and Denver.

Some past seasons have begun with audition episodes that have emphasized duds, clunkers and the severely deluded -- people who come to the auditions with wildly inflated confidence in their musical abilities, but then fall flat on their faces when they open their mouths to sing.

Next week’s season premiere has a few of those, but most of the auditioners seen in the episode are well-meaning, likable young people with interesting backstories. For example, one of them is a 15-year-old girl who lives on a remote ranch in Colorado without electricity (except for a generator the family runs to watch “American Idol”). When she performs before the “Idol” judges, she plays a cello and sings “Chainsaw” by The Band Perry. And she wins them over too.

Near the end of the show, however, right before a commercial break, announcer Ryan Seacrest teases an upcoming visit by a “surprise” guest. Seacrest is also a creator and executive producer of “Keeping Up with the Kardashians” on E! -- so it’s reasonable to assume he had a hand in foisting Kim and Kanye on the rest of us.

When the show returns, Seacrest waits outside the audition room with Kim as Kanye “auditions” inside before judges Keith Urban, Jennifer Lopez and Harry Connick Jr. The three judges pretend to be surprised when West enters the room and then they ask him to “audition.”

He then performs a rap song that seems to be about Lopez -- with lyrics that require West to utter the f-word at least twice. The word is bleeped, of course. But there’s little doubt what the word is -- at least on the version of the show Fox provided for preview, which is to say that in the version the network will air, it is entirely possible that West’s mouth will be concealed under a pair of cartoon lips or some such to make it impossible to lip-read the f-word. But it won’t be impossible for anyone of reasonable intelligence to figure out what the word is.

Whether or not they’re bleeped or concealed, rap lyrics containing words that in the real world would earn them a “parental advisory” designation do not belong on “American Idol.”

If any other contestants came on the show and performed an R-rated rap, they would likely not make it to the next round. As it happens, with or without the bleeped f-word, West’s performance was so lackadaisical and meritless that it actually turned out to be the worst performance seen on the whole show. The judges gushed over him anyway, and “awarded” him with a golden ticket to Hollywood.

Farewell, “American Idol,” it’s been nice to know you.

The 15th and final season of “American Idol” premieres Wednesday (Jan. 6) at 8 p.m. Eastern on Fox.