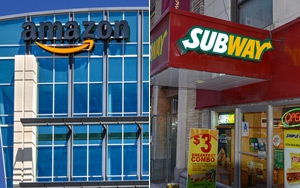 Last year, for the third year in a row, Amazon had the highest perception ranking within the U.S. market as measured by YouGov BrandIndex's Buzz score.

For the Buzz scores, BrandIndex tracks 1,400 brands daily, asking respondents: "If you've heard anything about the brand in the last two weeks, through advertising, news or word of mouth, was it positive or negative?" The scores range from 100 to -100, with a zero score equaling a neutral position.

Amazon and Netflix were the only brands in last year's top 10 to improve their scores this year compared to last; the others were even or dropped a few points.

Rounding out 2015's top 10: Google; Cancer Treatment Centers of America (newly added to the YouGov BrandIndex database along with other hospitals in early 2015); Apple and Samsung (tied at #6); iPhone (new to the top 10); and Lowe's and Walgreen's (tied at #9). Walgreen's was also new to the top 10.

Subway, hit by the child pornography and sex-with-minors scandal that sent its longtime brand rep Jared Fogle to prison, dropped from #3 among all brands (across categories) last year to #20 this year, as its Buzz score dropped from 24.9 to 17.2.

The brand realizing the largest gain in average Buzz score in the U.S. last year was General Motors—which has rebounded remarkably quickly from the major engineering safety cover-up scandal that came to light in early 2014. Although GM's perception hit bottom that April, its car sales hit records only two months later, notes YouGov.) GM's score rose 14 points, from -13.2 in 2014 to 0.8 in 2015.

Chevrolet—the GM brand that took the brunt of the faulty ignition crisis—saw its Buzz score rise by 7.6 points last year, from 7.4 to 15.

Target—still on the comeback trail from the huge data security crisis identified during the 2013 holidays—saw the third-largest gain in Buzz score: up 6.7 points, from 9.3 to 16.

In addition to being the second highest-perceived of all brands, Netflix ranks #4 in perception gain: Its score rose 4.2 points, from 26.1 to 30.2. At this point, the 2011 furor over Netflix's jacking up its fees seems to be long forgotten, as it wins new customers and existing customer loyalty with original, award-winning content.

In fifth place: Trivago, which saw its score rise 3.6 points, from 8 to 11.6. On the way, it passed Priceline, Expedia, Travelocity and Hotwire to become the highest-perceived brand in the travel booking category. YouGov attributes the quick rise in no small part to awareness-building via the ubiquitous "Trivago Guy" (Tim Williams) commercials.

Flonase is #7, with a gain of 3.1 points, from 4.4 to 7.5. "Thanks to a very bad allergy season, Flonase generated almost $100 million in sales in its first 16 weeks on the shelf, to become the category best-seller," sums up YouGov.

Amazon Instant Video/Prime Instant Video gained 2.7 points (rising from 8.9 to 11.6) on the strength of its expanding streaming content and unlimited access/storage for music and photos, as well as its two-day shipping. Its July "Prime Day" promotion may also have helped, although many consumers weren't impressed by the prices offered.

Facebook—which grew from 1.39 billion to 1.55 billion active users in last year's first three quarters (and in August saw 1 billion users on the same day, for the first time)—also saw a point gain of 2.7, from 10.9 to 13.6. This was Facebook's first appearance on the annual perception gainers' list.

Rounding out the gainers: Amazon, with a 2.4-point increase, from 29.7 to 32.1. Its aggressive services and capabilities expansion yielded more share and revenue this year (and even some profits). YouGov notes that of every additional $1 Americans spent for items online this year, Amazon captured 51 cents, according to a recent estimate by analysts at Macquarie Research.

The annual perception rankings, viewable in a dedicated area on the firm's site, also include U.S. rankings by industry categories and demographic segments, as well as brand rankings by countries.