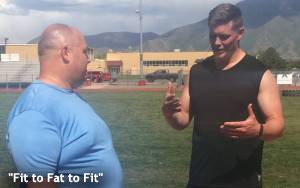 Another day, another reality-show gimmick.

This one is called “Fit to Fat to Fit,” and it posits that professional trainers would be better practitioners of their professions if they could only learn how it feels to be obese. This way, says this new show premiering Tuesday night on A&E, trainers can gain the empathy they need to work more effectively with their overweight clients.

“The experts don’t understand because they’ve never been fat,” says a narrator near the beginning of the premiere episode, which I watched last week. When you stop and think about it, though, that doesn’t exactly wash. For example, just because a cardiologist might never have had a heart attack doesn’t mean he cannot empathize with a patient who has had one.

Nevertheless, before you can say "Robert De Niro in 'Raging Bull'," an extremely physically fit personal trainer named J.J. goes on a weight-gaining food binge that will pack on 61 extra pounds just so he can feel more empathetic to a client named Ray, who weighs 389 pounds at the outset of the show’s premiere episode.

Ray’s goal is to get his weight down to 250 pounds, and the gimmick of the show is that J.J. will lose his own weight along with him. And along the way of this "journey" (TV shows like this are big on "journeys"), J.J. will learn what it’s like to be an obesity sufferer -- to not feel energetic, to feel unattractive and to be consumed with guilt every time he shoves a juicy, fattening cheeseburger in his mouth when he knows he shouldn’t.

What you’ll see if you tune in to sample "Fit to Fat to Fit" is a storyline told in a one-hour arc starting with the setup in which we meet the trainer and his client and get to contrast their households and lifestyles. Not surprisingly, J.J. lives the fit life, while Ray eats compulsively and then worries about what his obesity is doing to his health and his marriage.

Among other things, he and his wife -- who is also overweight -- would like to adopt a child or two. But they fear that adoption agencies will disqualify them because they’re fat. Do adoption agencies really practice fat-shaming? You learn something new everyday.

Then J.J. goes on his eating binge, after which the two train together over a period of many weeks, but in the show seems to take about 12 minutes. The show’s big moment, of course, is the long-awaited “reveal” -- a staple of shows like this –- in which Ray will stride triumphantly into a gathering of his family members who will beam over his transformation.

Predictably, Ray achieved his weight-loss goals and his parents and wife praised him lavishly for his efforts, building up his self-esteem to unprecedented heights. It’s a feel-good result, to be sure, and one that only a big meanie would dare denigrate.

But the show itself is a different story. The fact is, not all that much happens in the course of this one hour, which feels terribly long when watching this show. There’s a lot of weeping in the show -- demonstrations of emotion that are very common on shows like this. Everyone cries in this show -- J.J., Ray, both of their wives and Ray’s mom and dad. Clearly, the off-camera personnel conducting these interviews are better at eliciting tears than Barbara Walters.

The emotional outbursts are understandable, but one sometimes gets the impression from TV’s reality shows that we live in a country of crybabies. It’s also true that in “Fit to Fat to Fit,” the stakes are high for the two people -- the trainer and his client -- who are trying to lose the weight. And who doesn’t like a happy ending?