'Baskets' On FX: The Clown Comedy That Forgot To Be Funny 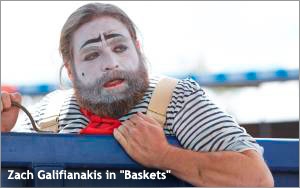 If TV comedies have evolved to the point where they are to contain no actual comedy at all, then “Baskets” on FX represents the pinnacle of contemporary comedy achievement.

This is the kind of show that one could even praise as being an anti-comedy of the highest order -- but only in cases of extreme intellectual denial. For this is a show that expects its viewers to be too embarrassed to admit that they don’t get the joke.

Instead, they are probably supposed to gaze upon the triumvirate named in the show’s credits as its co-creators and genuflect. These three are Louis C.K., mastermind of the FX comedy “Louie”; Zach Galifianakis, star of the “Hangover” movies and others (including “Birdman”); and Jonathan Krisel, whose name will be familiar to anyone who is cool enough to have watched “Portlandia,” on which he is a producer, writer and a director.

However, if “Baskets” demonstrates anything, it’s that a project can go horribly wrong when a TV network cedes total creative control to the boldface names who brought them the show’s concept and then got the network to agree to simply leave them alone while they produced the show.

This may or may not have happened in the process of producing “Baskets,” but the show plays like it did. “Baskets” premieres Thursday night (Jan. 21) on FX. It is a supremely unattractive TV show about a bunch of losers, starting with Chip Baskets, the lead character played by Galifianakis.

He is a misfit from Bakersfield, Calif., who we first meet in a classroom somewhere in Paris. We quickly learn it’s a clown college and Chip has come all the way to France to receive a “classical” education in the low art of professional clowning. He has no aptitude for it and basically flunks out. So it’s back to Bakersfield for him.

There, he is hired as a rodeo clown and christened “Baskets the clown” by the rodeo’s manager. He makes almost no money and lives in a motel. And that, my friends is the show. Clearly, the executives at FX who OK’d this mess must not have been paying attention during the elevator ride in which this pitch was made.

The other characters who populate the sad, charmless and irredeemable world of Chip Baskets include a dull-witted, monotonal young woman named Martha who works at Costco; Chip’s mother, Christine (played inexplicably by comedian Louie Anderson in drag); and Chip’s twin brother Dale, also played by Galifianakis.

Yes, their names are actually Chip and Dale, which made me wonder: Why Chip and Dale? What was wrong with Mutt and Jeff, Tom and Jerry, Heckle and Jeckle or Frick and Frack?

The fact that this show’s creators decided to make Chip and Dale twins, thus casting Galifianakis in two roles, marks “Baskets” as a vanity project for him. His playing of two roles does nothing at all for the show, which may have benefited from casting someone else in the brother role.

On the other hand, they could have cast the most charismatic actor in the known universe in the role of Dale and even that wouldn’t have lifted “Baskets” out of the misery it seems intent on wallowing in. The very existence of “Baskets” proves that it’s possible to make a TV show in which no aspect of it whatsoever is in the least bit attractive -- not the characters, not the settings, not the situations.

If producing such a show was your goal, then you would probably wind up making a show like “Baskets,” a situation-comedy with barely a situation at all, and no comedy.

tv
2 comments about "'Baskets' On FX: The Clown Comedy That Forgot To Be Funny ".
Check to receive email when comments are posted.
Read more comments >
Next story loading