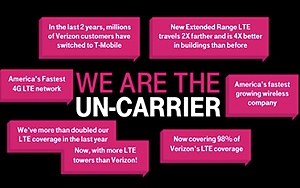 T-Mobile is at it again -- this time trying to hit Verizon where it will hurt most: by attacking their network.

This week, T-Mobile is launching the #BallBusterChallenge, a play on Verizon’s recent television ad, which demonstrates Verizon’s network superiority using colored balls rolling on a track. For the challenge, T-Mobile will be hitting markets around the country inviting Verizon customers via its Twitter account and #BallBusterChallenge hashtag, to compare their current network with T-Mobile’s.

“The goal here is to put reality in people’s hands so they can see how the two networks stack up in real-time,” a T-Mobile representative tells Marketing Daily. “We want to get credit for all of the hard work our network and engineering teams have put in to grow our network.”

The challenge will give Verizon customers an opportunity to see how the two networks compare in three categories: voice calls, texts and data speeds. If Verizon’s network prevails in two of the three categories, T-Mobile will give the customer $100. If T-Mobile performs better, the customer has to pose for a photo that will go on a display that T-Mobile is calling the “network sign of shame.” The challenge kicks off in T-Mobile’s hometown of Seattle, and moves down the coast to California before spreading out across the country.

“We’re looking to be in a mix of high-trafficked locations, which tend to be in larger cities, as well as less expected locations -- but not so remote that we can’t find anyone to participate,” the representative says.

In addition to the market challenge, T-Mobile has released a new television commercial that attempts to rebut the Verizon ad, using pop-up text on the original ad to point out the study cited in the commercial was funded by Verizon and that the data used for comparison against T-Mobile is old.

“T-Mobile more than doubled LTE coverage in the last year, and now has more LTE towers than Verizon,” the representative says. “This campaign is going to show everyone else how the two networks really stack up -- not leave it to Verizon’s advertising to do so.”