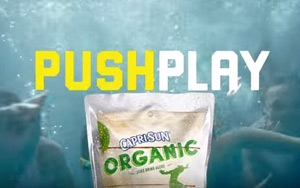 Capri Sun has launched the first stage of an integrated advertising campaign for its new organic fruit drinks line.

That platform was based on the insight that today's parents want to move away from heavily structured lifestyles for their kids, to let them be creative, engage in spontaneous play, and have fun, says Dennis Wu, director of refreshment beverages for parent company Kraft Heinz.

The three new 15-second spots geared to kids debuted on networks including Nickelodeon and Cartoon Network on January 23 are "Go: 15," "Backyard Fun" and "Water Balloon Fight."

In mid-February, the brand will launch a regional digital effort: rich media banners targeted to parents within the specific markets served by several large retail chains.

Those retailers were so enthusiastic about the launch of the organic line that Kraft agreed to get the products into their stores in January, even though the national retail rollout won't occur until April, explains Wu. The regional digital campaign is designed to "provide some advertising support for these retailers in the period before the national campaign begins," he says.

For the April rollout, Capri Sun will begin airing a 30-second version of the kids' "Go" TV spot, and 30- and 15-second versions of a spot aimed at parents, called "Let 'Em Go."

The full-length adult-targeted ad is viewable now on Capri Sun's Facebook page. It was posted at the end of December, along with a teaser message letting parents know that Capri Sun Organic is "coming soon."

The national campaign will also include print (parenting magazines, People, US Weekly and others); social media (specific implementations still being planned) and digital advertising.

The digital advertising buy will be programmatic and target a "wide variety of targeted segments," says Wu. Importantly, the "most relevant" segments will receive unique messages, he reports.

The campaign will run through the end of October.

Sales of Capri Sun Organic have exceeded expectations in the month that the products have been available in the limited number of retail chains, says Wu.

Wu confirms that there is strong demand among some consumer segments for organic varieties—both among Capri Sun customers and within the juice and juice drinks category as a whole (where Capri Sun is the No. 1 seller, according to the company).

The somewhat higher costs of organic products reflect their ingredients and certification process, and Capri Sun Organic is no exception. Its suggested retail for a 10-pack of 6-ounce pouches is about $4.29, compared with basic prices of $2.99 for the brand's 100% Juice and Super V line products, and $2.50 for the original line.

The brand, which has worldwide sales of more than $500 million, has been evolving for the past three years.

That started in 2014, with the introduction of a clear bottom on the juice drinks' pouches. That was originally a response to some social media complaints about mold — an occasional occurrence in products that do not contain preservatives. But the brand quickly realized that it was also missing a major opportunity to market the brand's "all-natural" and "free-from" qualities.

Last year, Capri Sun followed up by replacing high-fructose corn syrup with sugar in the original juice drinks and Roarin' Waters lines (sucralose was also replaced with stevia extract). The juice drinks' calories-per-serving was reduced by 10, to 50.

Launching the organic line was the next logical step, says Wu. "Organic is still a relatively small segment of the market, but we want to make sure that Capri Sun is meeting the needs of all consumers, not just our core segment," he stresses.