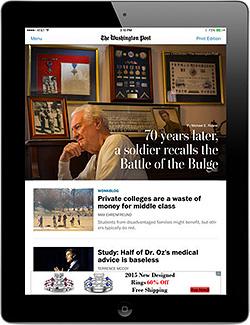 The Washington Post “Classic” iPad app might look a little different to readers during their Monday morning commute. An update to the app means a downloaded issue will delete if left unopened for three days.

The app was last updated in December, when some users complained about the issues taking up too much iOS storage space. Others complained that the subscription mechanism wouldn’t always recognize the reader and that the app was unresponsive.

The iTunes app description says the new storage rules will “save space on your iPad.”

Some readers may not be a fan of this feature, especially if you fall behind with your reading after traveling, holidays or an especially busy week.

But the issue of storage continues to be a major problem for iOS device owners, due to the fact that Apple still offers customers the option to buy an iPad with 16GB of storage.

The update also fixes a crash on iOS 8 “that was happening in the background,” according to the iTunes description.

There are no new iTunes reviews regarding the update yet.

The Washington Post“Classic” iPad app, on the other hand, includes national and international content along with local news and weather, arts and entertainment. It also includes a digital replica of the metro D.C. print edition and combines an online news section as well as the ability to download and read a version of the print newspaper.
apps, ipad, mobile, newspapers, web sites
Next story loading