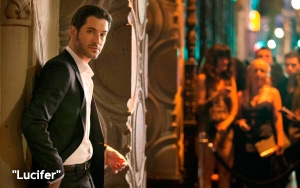 Against all of my better instincts, I have to admit that Fox’s “Lucifer” exerts some kind of life force that makes it likable.

Call it charm or charisma, it’s the same effect the show’s title character has on almost everyone he meets -- which is the point of the show. This Lucifer (full name Lucifer Morningstar) has a way of persuading people to reveal their deepest secrets to him -- which is very helpful in his pursuit as a man about town and amateur sleuth.

In the premiere of “Lucifer” Monday night on Fox, he joins forces with an attractive LAPD detective to find the person who hired someone to gun down a pop music star. However, despite this premiere-episode plot line, it’s unclear whether he’ll go sleuthing in subsequent episodes.

Here’s hoping that he does. This might seem like an obscure reference, but when I watched a preview DVD of tonight’s “Lucifer” premiere, the voice of the British actor who plays the title character -- Tom Ellis -- reminded me of George Sanders, the British movie actor who played the suave, crime-fighting heroes in “The Falcon” and “The Saint” series in the 1930s and ’40s that you can still watch on Turner Classic Movies.

If memory serves, those two characters had various, hard-to-define powers beyond those of ordinary men. So does Lucifer Morningstar. He is actually a real devil -- the spawn of Satan -- but he apparently grew tired of the drudgery of hell and decided he would join the human race in Los Angeles, where he runs a nightclub, sleeps with a succession of pretty women and drives a vintage Corvette convertible from the 1950s. He’s immortal too, so he can beat up bad guys, and even get shot by them, with impunity.

The show is a young man’s fantasy, of course, aimed at 20- and 30-something males who imagine that if they only looked like Lucifer and drove a car as cool as his Corvette, that all heads -- especially female ones -- would turn to gape at them as soon as they enter a bar or nightclub.

In a side story that is hinted at twice in the series premiere, Lucifer is visited by an emissary from hell -- apparently a brother of his, or at least someone else who is a spawn of the same father -- who demands that Lucifer return to the underworld and behave like a real demon.

This emissary’s gripe is that Lucifer is becoming too sympathetic to the humans of L.A., even as he uses his devilish charm to manipulate them. Among his “victims” in the premiere are an L.A. traffic cop who Lucifer persuades to accept a bribe, and a psychiatrist (played by Rachael Harris) who agrees to violate the confidentiality of one of her patient’s by revealing the identity of the patient’s secret lover.

So what’s wrong with “Lucifer”? Not much really, but only if you buy into the show’s high concept about a resident of Hell gone rogue who goes around righting wrongs instead of causing them.

For such a show to work, it needs a charismatic star on the order of Tom Ellis, who you come to believe in the role of Lucifer in spite of the fact that the premise of this show is far-fetched at best or, at worst, completely nonsensical.

Sometimes, though, these far-out ideas have a way of working. Compare “Lucifer” to another show that premiered recently on Fox -- “Second Chance” – about a man who died but was then brought back to life in some sort of modern-day Frankenstein process.

In “Second Chance,” this 21st-century Frankenstein is charmless, while Lucifer has loads of it. What’s next on Fox? A nice, 21st-century Count Dracula, perhaps?