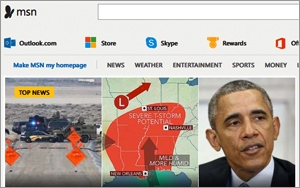 A relatively small group of publishers dominate Americans’ online news consumption, according to a new study by research outfit SimilarWeb, which compiled figures for the top news publishers covering both mobile and desktop audiences in 2015.

Overall, the top 10 publishers -- together owning around 60 news sites -- account for 47% of total online traffic to news content last year, with the next-biggest 140 publishers accounting for most of the other half, SimilarWeb found.

The biggest online news publisher for the U.S. audience was MSN, owner of MSN.com, with just over 27 billion combined page views across mobile and desktop, followed by Disney Media Networks, owner of ESPN and ABC News, with 25.9 billion.

A bit further down the totem poll were CBS Corp., owner of Cnet.com, with 9.9 billion combined page views; NBC Universal, with 9.5 billion; Matt Drudge, with 8.5 billion; Advance Publications, with 8 billion; and Fox Entertainment Group, owner of Fox News, with 7.9 billion.

Turning to specific publications, MSN.com accounted for all of MSN’s traffic, again with 27 billion page views, followed by ESPN.go.com, with 23 billion; CNN.com, with 8.8 billion; Drudge Report, accounting for all of Matt Drudge’s traffic at 8.5 billion; Buzzfeed.com, at 6.8 billion; Foxnews.com, at 6.9 billion; NYtimes.com, with 6.3 billion; News.yahoo.com, at 6 billion; Cnet.com, at 5.2 billion; and Huffingtonpost.com, at 4.3 billion.

In terms of mobile versus desktop, Buzzfeed.com led the way with 63% of its page views coming from mobile, followed by ESPN.go.com at 46%, CNN.com at 44%, and Huffingtonpost.com and News.Yahoo.com, both with 34%.

However, a number of smaller publishers had even more page views coming from mobile proportionally, led by Hispanic broadcaster Univision.com at 78%, followed by Health.com at 75%.

mobile, online publishing, web sites
5 comments about "10 Publishers Account For Half Of All Online News".
Check to receive email when comments are posted.
Read more comments >
Next story loading