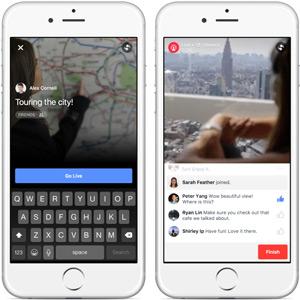 A day after wowing Wall Street with its quarterly earnings, Facebook is expanding the ability to share live video to all domestic iPhone users.

To share live videos, iPhone owners need only tap the “Update Status” tab, and then select the “Live Video” icon. They also have the option of writing a quick description of their video, and choosing the audience they want to reach before making their live.

During their broadcasts, users will see the number of live viewers, the names of friends who are tuning in, and a real-time stream of comments. When they end their broadcast, it will be saved on Timeline like any other video, which can then be deleted or kept for friends to watch later.

The change is part of a broader effort by Facebook, which threatens Twitter’s Periscope and similar live video-streaming services.

Since last August, Facebook has been testing Live with Pages including "The Tonight Show Starring Jimmy Fallon," U2, The White House, and Real Madrid.

Late last year, the social giant began inviting a “small percentage” of its roughly 1.5 billion users to try live-video streaming. To encourage viewing, Facebook has been featuring users’ live streams right in the News Feeds of their friends and followers.

Driven by video and mobile, Facebook is now on track to rake in roughly $12.14 billion in U.S. digital ad revenues by 2017, according to a recently revised forecast from eMarketer.