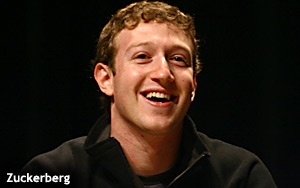 Beating analysts’ estimates, the social colossus saw quarterly profits of 79 cent per share on $5.8 billion in revenue -- up just over 50% during the same period last year.

Echoing other analysts, Bank of America’s Justin Post estimated that Facebook needed to report quarterly revenue of at least $5.43 billion to keep the critics at bay.

Among other areas of strength, Facebook seems to be finding traction with its Audience Network, which achieved an annual run rate of $1 billion in revenue, last year.

Joining a crowded ad network marketplace, Facebook first launched the Facebook Audience Network, or FAN, in mid-2014. With FAN, the social giant offered its publishing and mobile app developer partners the promise of targeting registered Facebook users wherever they go. Just this week, it officially expanded FAN to include support for the mobile Web.

At the risk of alienating users, Facebook has also been far more willing to monetize its popular Instagram property. Brand Networks, for one, said it saw ad impressions on Instagram rise more than 13-fold from 50 million in August to 670 million in December.