Mike Nichols 'American Masters' Documentary Is Not To Be Missed 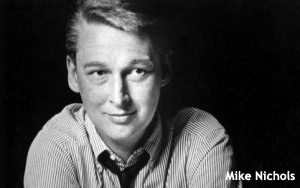 The best part of a new “American Masters” documentary about Mike Nichols airing Friday night is Nichols himself.

He gets plenty of airtime in interview segments that look like they were filmed some time during the past couple of years. He died last year at age 83.

At just a little more than 53 minutes in length, this documentary -- subtitled simply “Mike Nichols” -- is not a comprehensive biography of the great director’s life. It is more like a televised opportunity to become acquainted with him. It is a very rewarding experience -- illuminating and entertaining.

Listening to him talk, you can become mesmerized by the quality of his voice and the wisdom of what he says. He gives an impression of being very self-confident and unflappable, but never cocky or boastful as he talks with an unseen interviewer about actors and acting, comedy and tragedy, creativity, theater and movies.

In fact, his is the only voice you hear for almost the first 12 minutes of this documentary, which was directed by his long-time friend and one-time collaborator Elaine May. When he talks, you come to feel like you’re in the presence of a very rare personality -- an authentic genius. It’s a feeling that was apparently shared by those who knew him.

“He was super-duper intelligent,” says Matthew Broderick, who Nichols directed in the film version of “Biloxi Blues.” “It was like somebody from another planet, where they’re a little smarter than us, had come down and this was their representative,” Broderick says with noticeable awe.

In some ways, Nichols seemed almost in awe of himself, “Sometime between 12 and 14,” he tells the unseen interviewer at one point, “I read every word Eugene O’Neill ever wrote. I have no idea why,” he says wonderingly.

Nichols was a superstar of the performing arts from the 1950s until his death. A list of the stage productions he directed would far exceed the preferred word count for this TV blog. His movies even more so -- everything from “The Graduate” and “Carnal Knowledge” to HBO’s production of “Angels in America.”

He worked with everyone and was widely respected, and also beloved. In the documentary, Dustin Hoffman talks about how Nichols directed him in “The Graduate.” Meryl Streep is there to talk about his direction of “Silkwood” and “Angels in America” (in which she appeared as the ghost of Ethel Rosenberg). Tom Hanks recalls how rewarding it was to work with Nichols on “Charlie Wilson’s War.”

Playwright Jules Feiffer tells the story of how Nichols wanted to make a movie of Feiffer’s play “Carnal Knowledge” and wished to cast a relatively unknown actor, Jack Nicholson, in a key role.

“Trust me,” Feiffer says Nichols said at the time, “he’s going to be our most important actor since Brando.” And Nichols was right, of course.

Nichols must have been a pleasure to keep company with -- a very entertaining, self-deprecating storyteller. In the documentary, he pulls no punches in an anecdote about movie mogul Jack Warner, for whom Nichols directed “Who’s Afraid of Virginia Woolf?” in 1966, describing Warner as an ill-mannered, penny-pinching boor.

Of “Catch-22,” the big-budget movie he directed after “The Graduate” that was based on Joseph Heller’s novel about World War II airmen, Nichols says with a laugh: “We had the sixth-largest air force in the world. We came after France!”

“Catch-22” was not exactly warmly received by critics. In the documentary, Nichols says of critics: “The people who describe all of our work to us often don’t know what they’re talking about. They are people who think expressing an opinion is a creative act.”

Well, here’s an opinion that’s not especially creative, but it is heartfelt: I can’t think of a more worthwhile hour you could spend than watching this Mike Nichols documentary tonight on PBS.